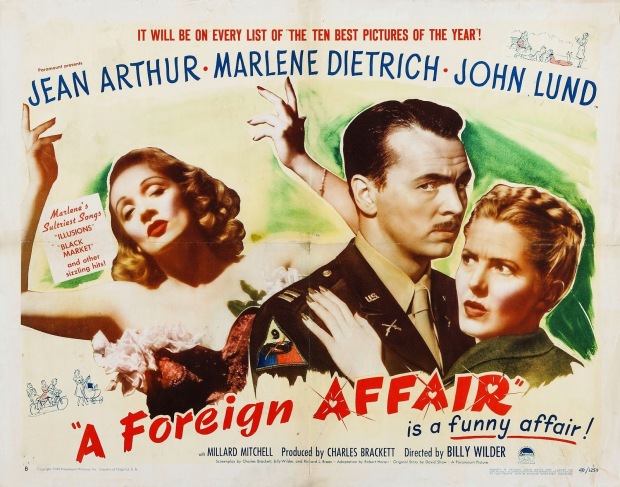 In the aftermath of World War II, American Congresswoman Phoebe Frost (Jean Arthur) is sent to Germany to evaluate the morale of American troops still in the area. When she arrives, she comes bearing a homemade chocolate cake for Captain John Pringle (John Lund), a gift from his fiancee. Before long, she’s being whisked off on a tour of the city, during which she’s appalled to see American servicemen cavorting with German women. In fact, when she’s mistaken for a German woman by a couple of  American servicemen, they take her out for drinks at a club where singer Erika von Schluetow (Marlene Dietrich) is performing.

While at the club, Phoebe learns that Erika was reportedly the girlfriend of a prominent Nazi leader who is now being protected by her American soldier boyfriend. She also sees a very familiar-looking cake being passed around the club. Unbeknownst to her, John is Erika’s secret boyfriend and he had traded his cake on the black market for a new mattress for her. Once Phoebe is able to prove Erika had ties to Nazi officials, she orders Erika’s apartment to be monitored constantly to find out who her boyfriend is and, still oblivious to who the person responsible is, assigns John to the task.

Following an awkward encounter outside of Erika’s apartment, in which she confronts John for keeping her waiting while Phoebe watches on, Phoebe drags John along to look up files on Erika. To prevent her from finding Erika’s files, John tries to convince Phoebe he’s in love with her. When he kisses her, she really does fall in love with him and John, still willing to protect Erika, even agrees to marry Phoebe to prevent her from investigating. Meanwhile, Colonel Rufus J. Plummer (Millard Mitchell) is aware of John’s relationship with Erika and wants him to keep seeing her in the hopes she will lead them to other Nazi officials.

From a historical standpoint, A Foreign Affair an absolutely fascinating movie to watch. It’s a movie dealing with Nazis and post-WWII Germany that was written and directed by a man who left Germany when the Nazi Party rose to power, stars an actress who despised the Nazis so much she renounced her German citizenship. It’s a role Dietrich absolutely despised, given how her character’s willingness to associate with known Nazis was in direct conflict with her own views. In fact, there’s a scene where Dietrich wears a gown she wore while performing for American troops during the war. It’s also a movie that was released shortly after the end of the war and was actually filmed in Berlin.

Even without the historical significance, it’s simply a good movie. A Foreign Affair is pure, unadulterated Billy Wilder — full of biting wit, razor-sharp dialogue, and a good amount of cynicism. In addition to Billy Wilder’s brilliant writing and direction, Jean Arthur is perfect as the uptight and repressed Phoebe. Although Dietrich hated this role, she worked very well with Billy Wilder and over 10 years later, he’d direct her again in one of her best performances in Witness for the Prosecution. It’s just a wonderful film. I’ve yet to be completely disappointed by a Billy Wilder movie.