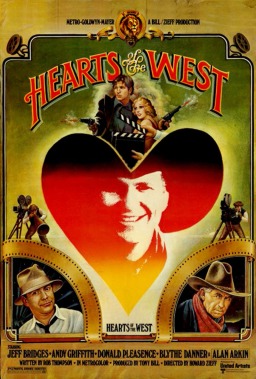 More than anything else in life, Lewis Tater (Jeff Bridges) wants to be a writer of Western novels. When he sees an advertisement for the University of Titan, he decides to enroll in some correspondence writing classes. The University of Titan had a Nevada address, so despite the advice from his family, Lewis decides he’d rather take classes in person so he can enjoy the atmosphere of being out west.

After making the long trip out to Titan, Nevada, he shows up at the address only to find out the University of Titan doesn’t actually exist; the “school” is run by a couple of con artists operating out of a local hotel. As fate would have it, Lewis ends up staying in the same hotel as the con artists and gets into a fight with them. In the tussle, Lewis takes their car and drives out into the desert until it runs out of gas. Then he decides to get out and walk through the desert and happens to wander onto the set of a movie being filmed by Tumbleweed Studios, a studio that specializes in “B” Westerns.

The film crew helps him out and let him ride back into town with them. He has a crush on their production assistant Miss Trout (Blyth Danner) and makes friends with actor Howard Pike (Andy Griffith), who recommends he get a job at a local restaurant. At least this way he can spend time around cowboys and get some inspiration for his big novel. He also applies for a job at the studio and is hired by Bert Kessler (Alan Arkin). Lewis starts out doing stuntwork, but works his way up to featured roles and becomes a star. Meanwhile, he has to watch out for the con artists from the University of Titan, who are looking for him.

Not one of my favorite movies, but Hearts of the West is quite pleasant and good for some laughs. The cast is fantastic; it’s full of great stars who I never knew were in this movie, mostly because I’d never even heard of this movie until I saw it in today’s lineup on TCM. Jeff Bridges was perfectly cast as the youthful and naive Lewis and I really liked Alan Arkin as Bert Kessler. Andy Griffith was a pretty good fit for playing a cowboy film star. It’s a little too slowly paced for my liking, I found myself starting to tune out here and there. Not bad, but not that great, either.