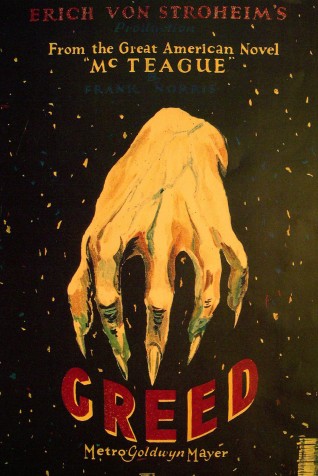 As a young man, McTeague (Gibson Gowland) works as a miner and doesn’t come from a wealthy family. His mother would love for him to have a better life, so when a traveling dentist comes to town, she begs him to take McTegue along as an apprentice. The dentist agrees and before long, McTeague has his own dentistry office in San Francisco. He’s not rich, but getting by and he has a good friend in Marcus (Jean Hersholt). Marcus is in love with his cousin Trina (ZaSu Pitts) and he wants to marry her. But when she suddenly needs some dental work done one day, it would prove to be a fateful day for all involved.

Marcus brings Trina to see McTeague and while they wait, she decides to buy a lottery ticket, not really expecting to win. When McTeague meets Trina, he falls in love with her and Marcus tries to be supportive and gives him his blessing to start courting her. It’s hard for Marcus to put his feelings aside and it gets even more difficult when they decide to get married. As difficult as that is, it gets worse when Trina finds out her lottery ticket was a winner and she’s won $5,000. Marcus becomes extremely resentful toward McTeague for not only taking Trina away from him, but for taking that money away from him, too.

$5,000 is a life-altering amount of money (the movie is set around the turn of the last century) and it could do a lot to help a newlywed couple get started in life together. McTeague wants to get a small house so they can stop living in a small apartment in a boarding house, but Trina refuses to spend any of the money. She insists on doing everything as cheaply as humanly possible, even if it means living on days old meat and living in an apartment one of their neighbors was murdered in, so she can squirrel away more money that she never intends to spend. Trina’s penny pinching ways cause a lot of tension between her and McTeague and things only get worse when Marcus spitefully rats McTeague out for practicing dentistry without a license. The couple has to sell virtually all of their possessions and McTeague struggles to find more work. Trina refuses to even let him have a few cents for car fare for him to go look for work on a rainy day.

Eventually, McTeague leaves town to work as a fisherman and takes $450 Trina had saved in addition to her winnings since they’ve been married. Trina is left behind absolutely furious and when she has to have some of her fingers amputated, she’s forced to become a school janitor for extra money, still unwilling to spend any of her $5,000. She even withdraws  the money from the bank so McTeague can’t get to it and sleeps on it at night. When McTeague returns from his fishing excursion, he finds Trina and asks her for a little money so he can get something to eat, but she refuses. The next day, McTeague confronts Trina again, but this time he kills her in a fit of rage and takes her $5,000.

Since McTeague is now a wanted criminal, he has no other choice to leave town, so he does and gets back into the mining game. But it isn’t long before begins to worry the authorities are after him. He takes a few supplies and heads into Death Valley on his own with cops following not far behind. Among the authorities is Marcus, who would love nothing more than to see McTeague brought to justice.

Greed is a movie that certainly has a level of notoriety in film history. Director Erich Von Stroheim infamously spent two years filming 85 hours worth of footage for this movie. Filming the scenes in Death Valley alone took two months and Von Stroheim’s original cut of Greed was an astonishing 42 reels long (approximately 8 hours, but could be longer depending on the speed it was projected at.) Von Stroheim only screened his original cut once for about a dozen people before Irving Thalberg insisted it be cut down to a more manageable length. Von Stroheim cut it down to 24 reels and wanted it released as two separate movies, but that didn’t happen. Instead, Thalberg had it cut down to 10 reels. For years, Greed only existed in an extremely truncated form. The hours of footage that were part of Von Sternberg’s original cut are believed to be lost, but the movie has been restored to a 4-hour long version using still photos to fill in some of the missing gaps.

Now rightfully celebrated as being one of the finest films to be produced during the silent era, Greed was greeted to less enthusiasm after its original release. The restored version does a good job of giving us a better idea of what Von Stroheim’s original vision was. The length alone is something that will deter a lot of people from watching it and I know some people aren’t big fans of using still photos in place of lost footage, but it’s really the kind of movie every self-respecting silent film fan should watch at least once. Admittedly, I don’t have the most patience for 3+ hour long movies, but I love Greed. Since it’s been a few years since I last saw it in its entirety, I re-watched it again before writing this post and I’d almost forgotten how good it is. It may be slow paced, but it’s a very compelling look at the power greed can have over people. I know I would be absolutely thrilled if that lost footage ever turned up somewhere.