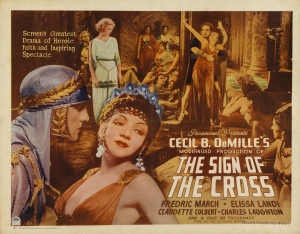 As Nero (Charles Laughton) watches Rome burn, he blames Christians for starting the whole thing rather than admit he started it.  Nero’s accusation places all Christians in Rome in great danger.  When Titus (Arthur Hohl) and Flavius (Harry Beresford) publicly admit to being Christians, they are arrested.  But when fellow Christian Mercia (Elissa Landi) tries to defend them, Marcus (Fredric March) sees her, instantly falls in love, and helps save Titus and Flavius.

Marcus is being romantically pursued by the empress Poppaea (Claudette Colbert), and when she hears that Marcus has fallen in love with a Christian woman, she becomes extremely jealous.  This places Marcus in a precarious position because not only does Poppaea want Mercia dead, Marcus’ rival takes the opportunity to try to push him out of favor with Nero.  Marcus does everything in his power to seduce Mercia, but there is nothing that can take distract her from her faith.

When all the Christians in Rome, including Mercia, are gathered to be fed to lions for a large crowd’s entertainment, Marcus fights until the very end to save her.  Just before she is to go into the arena, he begs her to renounce her faith to save herself, but she refuses.  Finally, Marcus decides he would rather die in the arena with Mercia than live without her.

The Sign of the Cross is, without a doubt, one of the most completely depraved pre-codes you’ll ever come across.  With Claudette Colbert’s infamous milk bath scene, hedonistic party scenes, revealing costumes, and some rather gruesome moments all mixed together with a message about religious persecution, it’s easy to see why The Sign of the Cross caused quite a commotion.  It’s frequently cited as being one of the movies that drew such a strong reaction from religious groups, it helped usher in the strict enforcement of the production codes.  Even though the movie is actually sympathetic toward Christians, religious groups couldn’t stand Cecil B. De Mille taking stories with religious themes and filling them with so much depravity.

When Sign of the Cross was re-released after the production codes were being strongly enforced, it took quite a bit of work to make it follow the code.  Several scenes had to be cut and in 1944, De Mille filmed a modern-day epilogue and prologue to frame the original movie.  Fortunately, the cut scenes were not lost and have since been restored.

Sign of the Cross isn’t my favorite De Mille movie (that title would go to Cleopatra), but I can’t deny that this movie is completely and totally De Mille’s style.  It’s big, it’s lavish, it’s over the top, it’s everything you expect from a Cecil B. De Mille movie.