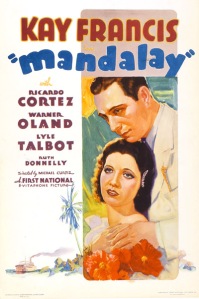 When gunrunner Tony Evans (Ricardo Corez) leaves his girlfriend Tanya (Kay Francis) behind for a job, he leaves her in the care of his boss Nick (Warner Oland).  Nick wants her to work at his nightclub and, feeling betrayed, Tanya initially refuses to do have anything to do with Nick and his club.  But then she realizes that using her looks and working at the club might actually help her get out of there.  While working at the club, she becomes known as Spot White, notorious woman of affairs.  In fact, she’s so notorious that the police commissioner wants her to leave the country.  And she does, but not without blackmailing him for some money first.

Tanya gets on a boat headed for Mandalay and changes her name to Marjorie Lang.  Not long after getting on board, she cuts herself, which leads her to meet Dr. Gregory Burton (Lyle Talbot).  Like Marjorie, Gregory is looking to start a new life.  Gregory once killed a patient when he performed surgery while drunk, so now he wants to go to an area facing a deadly fever outbreak to make amends.  Marjorie and Gregory fall in love during the voyage, but Marjorie’s happiness is interrupted when she finds out Tony is also on board.

Tony wants to get back together with Marjorie, but she wants nothing to do with him.  But when Tony gets word that the police are after him, he fakes his own death and Marjorie is blamed for it.  But after her name is cleared, she discovers Tony is still alive and this time, she really does kill him.

Mandalay may not be anything substantial, but it is a very entertaining way to spend a little over an hour.  It’s over the top and trashy, but in the most wonderful way.  If you like Kay Francis, you’re going to love her in Mandalay.  She’s really at her pre-code best here.  And if you’re a fan of pre-codes in general, Mandalay is a must-see.  It’s got just about everything — prostitution, alcoholism, murder

After the death of her husband, Amy Kolverer (Marlene Dietrich) turns to walking the streets to support herself.  One night, she encounters a man who gives her the chance to become a spy on behalf of Vienna. The government is looking to get some information on Colonel von Hindau (Warner Oland), who they believe has been feeding information to the Russian Colonel Kranau (Victor McLaglen).  They know a woman would be much more likely to get the information they need than a male agent.  Amy accepts the offer and becomes known simply as X27.

Amy manages to find both von Hindau and Kranau at a masquerade ball and that night, she not only gets the information she needs from von Hidnau, she corners him so well that he would rather commit suicide than surrender to her.  She immediately goes to work on Kranau, but Kranau isn’t about to go down as easily as von Hindau.  First, he escapes from her when she approaches him in a nightclub.  Then he sneaks into her apartment and finds her spy orders.

When Amy goes to Poland to carry out her next mission, she gets the information she needs by posing as a maid and coding her findings as a music composition.  But then Kranau finds her, destroys the music she’s written, and threatens to have her executed.  For her last request, Amy asks to spend the night with Kranau, and he agrees to it. But then Amy drugs his wine, escapes, and reveals all of her findings to the Austrian government, which leads to several Russian officials being arrested, including Kranau.  Amy gets permission to interrogate Kranau privately and allows him to escape.  This is the end of the line for Amy and she is executed for treason.

Of all the Dietrich/von Sternberg collaborations, I feel like Dishonored is the most under-appreciated of the bunch.  Perhaps the fact that it was only recently released on DVD for the first time has something to do with that. But now that it’s more available, hopefully more people will rediscover it because it’s really worth a look.  It’s not the best of their teamings, but it’s very interesting. I prefer Dishonored over Garbo’s Mata Hari.

I was not a fan of Victor McLaglen at all in this, but the teaming of Dietrich and von Sternberg absolutely can’t be beat.  First of all, you have got to see Dishonored if only to see Dietrich meowing like a cat.  No, seriously. There is a scene in this movie of Marlene Dietrich meowing and it is hilarious.  Marlene seemed to enjoy playing Amy and it’s a lot of fun to just watch her work.

Marlene Dietrich’s image, especially when she was working with Josef von Sternberg, was always extremely polished.  She was always lit to perfection, quick witted, and exceptionally glamorous, never a strand of hair out of place. So I was very fascinated by the fact that in Dishonored, there are moments when von Sternberg let her not be seen as supernaturally perfect. Early in the movie, there’s a scene where Marie walks into her apartment and takes off her elaborate hat and veil to reveal her very mussed hair underneath. I absolutely loved that moment, it was just so not how we typically picture Dietrich.  Later in the movie, when Marie is posing as a maid, not only does she wear very minimal make-up and an unflattering hairstyle, she acts pretty silly, too. Before seeing Dishonored, if you had told me that there was a Marlene Dietrich movie that involved a scene of her wearing little make-up and meowing, I probably would have laughed. But, believe it or not, it actually does happen here.

Nobody causes a bigger commotion by getting on a train than Shanghai Lily (Marlene Dietrich).  Shanghai Lily is one of the most notoriously loose women in China, so when she gets on a train from Beiping to Shanghai, all the men are excited to be on the same train as her.  Well, everyone except for Captain “Doc” Harvey (Clive Brook).  He’s apparently the one man who has never heard of Shanghai Lily.  After the train leaves the station, is surprised to run into his former girlfriend, Magdalen.  They hadn’t seen each other in five years and things have changed quite a bit in those five years.  Specifically, Magdalen has changed her name to Shanghai Lily.  Lily never stopped loving Doc, but he has a hard time accepting the girl he once loved now has such a reputation.

But as the trip goes on, Doc and Lily spend more time together and it becomes clear that Doc still loves her.  He even still carries the watch that she bought for him.  One night, while the passengers are having dinner, the train is suddenly stopped by Chinese Army soldiers and the passengers are questioned.  After a spy is arrested, Henry Chang (Warner Oland), a passenger on the train, immediately sends out a mysterious telegram.  The train takes off again and the passengers get ready for bed.  But later that night, they are stopped again, this time by rebel troops.  Unbeknownst to them, fellow passenger Chang is a rebel leader who had ordered his troops to stop the train.

Chang isn’t happy about one of his spies being arrested and now is looking for a passenger powerful enough to hold hostage to get his spy released.  When they question Lily, Chang asks her to spend the night with him, but she turns him down and he has other passenger Hui Fei (Anna May Wong) brought to him for companionship instead. But since Doc is traveling to perform an operation on an important government official, he’s the unlucky one to become Chang’s hostage.  Desperate to get Doc out safely, Lily offers to go with Chang if Doc is released unharmed.  He agrees, and Doc is set free.  But Doc doesn’t realize why he’s been set free and is devastated that Lily would even consider going off with Chang.  Luckily, Lily is able to escape with a little help from Hui Fei and they get back on the train and leave again.  Doc wants nothing to do with Lily and won’t listen when a fellow passenger tries to convince him she was doing the right thing.  He struggles with his feelings about Lily all the way to Shanghai.

Marlene Dietrich and Josef von Sternberg made several movies together, but Shanghai Express is probably their signature collaboration.  It’s a wonderful movie and is the ultimate example of what an expert von Sternberg was at making Marlene look utterly fabulous.  The cinematography is exquisite and Shanghai Lily is easily the most spectacularly dressed traveler I have ever seen.  Marlene has some great line deliveries in this, I especially love the way she says, “It took more than one man to change my name to Shanghai Lily,” and, “There’s only one thing I wouldn’t have done, Doc. I wouldn’t have bobbed my hair.”  I liked the chemistry between Marlene and Clive Brook, the only thing I wish the movie had more of is the wonderful Anna May Wong.