After coming home from World War II, Vic Norman (Clark Gable) wants to get back into the advertising business.  When he lands an interview with Mr. Kimberly (Adolphe Menjou) at Kimberly Advertising Agency, their meeting is interrupted by Evan Llewellyn Evans (Sidney Greenstreet), the very demanding head of Beautee Soap, their biggest client.  Evans wants them to get socialite Kay Dorrance (Deborah Kerr) for a new ad campaign and Vic volunteers to talk to her into it.  When he arrives at her apartment, the two of them hit it off and he has no problem getting her to agree.  On the day of the photo shoot, Kay is unhappy with the negligee she is asked to wear and Vic stands up for her and gets them to photograph her with her children wearing a respectable evening gown. Evans isn’t happy when he finds out Vic disregarded their idea, but when he hears a radio spot produced by Vic, he’s won over.

Vic continues to see Kay and he wants to take her to The Blue Penguin Inn, a place in Connecticut he liked to visit before going to fight in the war.  But when he gets there, he finds out the place has gone downhill while he was away.  When Kay arrives, she doesn’t see Vic, but she finds out they would be staying in adjoining rooms and gets the wrong idea and leaves.  Vic is heartbroken, but his weekend is soon interrupted when Evans wants to have a Sunday meeting.  He wants Beautee Soap to have a radio show starring comedian Buddy Hare (Keenan Wynn), so he sends Vic out on the next train to Hollywood to sign a deal with him and get started working on the show.

On the train, Vic runs into his former girlfriend Jean Ogilvie (Ava Gardner).  It’s a good thing they’re still friendly with each other, because Jean is able to help Vic talk to Buddy’s agent David Lash (Edward Arnold) and he gets Buddy to do the show for a good price.  While working on the show in Hollywood, Vic and Jean rekindle their relationship, but Jean can see that Vic still loves Kay.  By then, Kay has come around and Vic finds her waiting for him one night.  Vic proposes and he becomes focused on being the best provider he can be.

Vic is determined to be the best provider he can be for Kay and her children, so when it turns out there’s a problem with Buddy’s contract, he resorts to doing some pretty awful things to get Lash to fix it.  But Vic honestly likes Lash and immediately feels awful about it.  He hates what the advertising business has done to him and decides to tell Evans off and leave while he still has his dignity.

The Hucksters has a lot going for it, but it could have been a stronger movie overall.  Clark Gable was very good in it and Deborah Kerr wasn’t bad, either.  This was Kerr’s first American film, so it’s too bad she didn’t really have very much to do in it.  Even though I liked them both separately, I wasn’t really sold on Gable and Kerr together.  I thought he had much more chemistry with Ava Gardner.  The supporting cast was excellent, particularly Sidney Greenstreet (who was so perfect for that role), Adolphe Menjou, and Keenan Wynn.

The Hucksters is just under two hours long, but I felt like it could have been a little bit shorter.  It also seemed like it should have packed more of a punch, but it didn’t quite get there.  The Hucksters was based on a 1946 novel by Frederic Wakeman, which from what I’ve heard, was pretty scandalous.  Clark Gable himself called the book filthy, so I can imagine the movie was a pretty heavily sanitized adaptation.  Maybe the novel has more of the impact I felt like the movie should have had.

When you have more than one screen adaptation of a novel, usually one is more faithful to the novel than the other.  However, in the case of The Maltese Falcon, it has two pretty accurate adaptations.  The first version, released in 1931 and stars Ricardo Cortez, Thelma Todd, and Bebe Daniels, does a pretty good job of sticking to the source material.  However, the 1941 Humphrey Bogart version is an even more accurate representation of the book.  It doesn’t stick to the novel exactly, but most of the dialogue is taken verbatim and the key story elements are kept in tact.

Most of the differences are pretty subtle and probably were changed for the sake of pacing.  For example, in the movie Sam finds out about La Paloma after he wakes up in Gutman’s hotel room and starts looking around the room.  It’s a much more drawn out process in the book.  In the book, Sam finds out Miss O’Shaugnessy didn’t go to Effie’s apartment like she was supposed to.  Instead, she had the cab stop to get a newspaper, then she asked to be brought to the ferry building.  So Sam gets a copy of the paper in question to look for clues, but doesn’t figure it out until he starts snooping around Cairo’s room and notices that the newspaper section with ship arrivals was of particular interest to him.  Although there’s nothing wrong with the way that part plays out in the book, if it were filmed that way, it would have slowed the movie down.  Another difference is that the character of Gutman’s daughter is completely absent from the Bogart movie (as well as from the Ricardo Cortez version, for that matter), but she wasn’t exactly a vital character in the book.

A lot of the other changes were definitely made because of the production codes.  What’s interesting about that content is that neither the 1931 or the 1941 version gets it exactly right.  The 1931 version tends to be a bit more scandalous than the book was, but it does include things that were in the book that couldn’t be included in the 1941 version.  There’s no way the 1941 version could have gotten away with the scene where Spade strip searches O’Shaugnessy after noticing that $1,000 of the $10,000 Gutman promised him was missing, but it was in the 1931 version.  The 1941 version also really had to downplay the fact that Cairo and Wilmer were both supposed to be gay, the 1931 version made that much clearer.  In the book, when O’Shaugnessy finds out that Sam has been talking to Cairo and that he’s prepared to offer more money than she can, she offers to sleep with him and proceeds to spend the night at Sam’s apartment.  When it comes to that part in the 1941 version, O’Shaugessy can’t offer herself to Spade or spend the night, so Sam just kisses her instead.  As for Spade’s affair with Iva Archer, the 1941 version actually depicts what went on more accurately than the 1931 version.  The 1931 version made that affair more salacious than the book described.  First of all, the book made Iva Archer out to be a little past her prime, which Thelma Todd most certainly was not.  There also weren’t any scenes involving Iva showing up at Sam’s apartment and finding O’Shaugnessy wearing her kimono nor were there any of Miles listening on the extension while Sam and Iva set up a tryst.

I really enjoyed reading The Maltese Falcon and I think anyone who likes either movie version would, too.  Like I said, what you see in either movie version is pretty much what you get in the book.  And since it’s not a terribly long book, either, I definitely recommend reading it.  As for which movie version I prefer, I think it goes without saying that the Humphrey Bogart version wins hands down.  The Ricardo Cortez version is good, but it doesn’t have the flawless cast and direction that the Humphrey Bogart version did.  I always loved the cast of the Bogart version, but while I was reading the book and got to read exactly how each character was described, I feel like that version had some of the most perfect casting of all time.  Nobody will ever make a better Sam Spade than Humphrey Bogart. 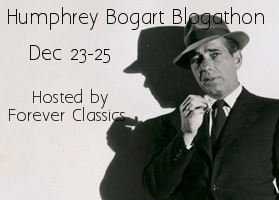 For more Bogie, be sure to visit Forever Classics for more Humphrey Bogart Blogathon contributions.