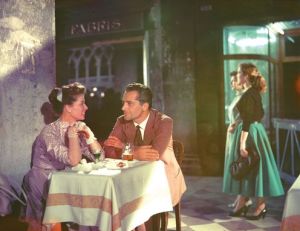 Jane Hudson (Katharine Hepburn, not to be confused with Bette Davis) is a middle-aged, unmarried secretary from Akron, Ohio.  After spending a few years saving up the money, she finally fulfills her lifelong dream of vacationing in Venice.  Even though she makes friends on the trip over and at the hotel, she quickly becomes lonely when she feels like the only single person amid an ocean of couples.  While sitting at a cafe alone, she realizes a man is staring at her, which makes her uncomfortable and she leaves.

The next day, Jane goes shopping and finds herself in a store owned by Renato (Rossano Brazzi), the man who was staring at her in the cafe.  He sells her a red glass goblet that he swears is antique and offers to try to find her a matching goblet.  Later, he goes to her hotel to ask her to dinner.  Jane is initially reluctant, but Renato convinces her to take a chance on him.  While they’re talking, another couple at the hotel comes in with half a dozen brand new goblets that look identical to the one Renato sold Jane and swore was antique.  Of course, Jane is mad, but Renato eases her worries and the two of them have a lovely evening together.

The next day, Jane spends the day getting all dolled up for her date with Renato that night.  While Jane waits for Renato at the cafe, Renato’s assistant comes to tell her Renato is running late, but accidentally admits that Renato is married and has children.  Absolutely horrified, Jane leaves and returns to the hotel.  Renato finds her and explains that he and his wife are separated, he just didn’t tell her because he didn’t want that to deter her.  He manages to convince Jane to stop merely longing for something and to actually experience it.  The two of them go on to have a wonderful and happy time together, leaving Jane to decide between staying in Venice with Renato or returning to Akron, Ohio.