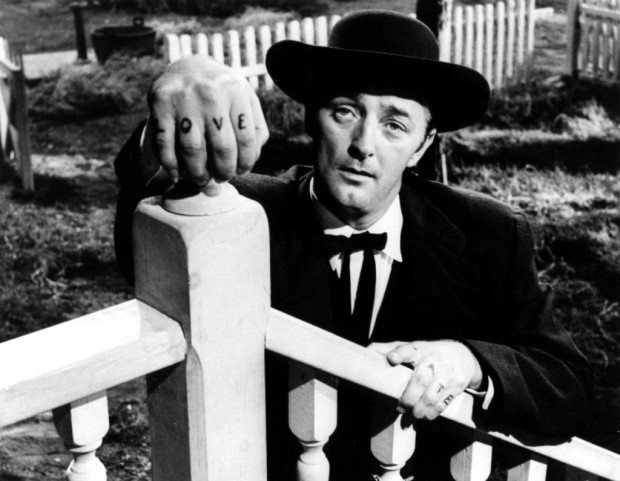 Once again, Sideshow Bob is out to kill his biggest enemy, Bart Simpson. This time, he starts out by sending Bart threatening letters written in blood. When Bob is up for parole, he manages to win over the parole board, despite the large “Die, Bart, Die” tattoo on his chest. Later in the episode, we see that he also has tattoos on his knuckles that are a nod to the sinister Harry Powell, played by Robert Mitchum in The Night of the Hunter. 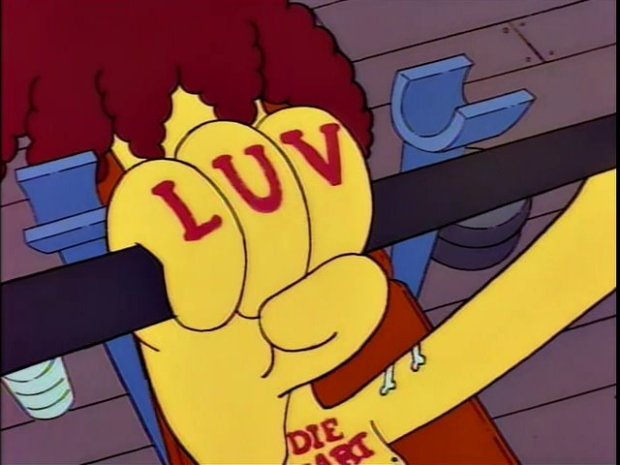 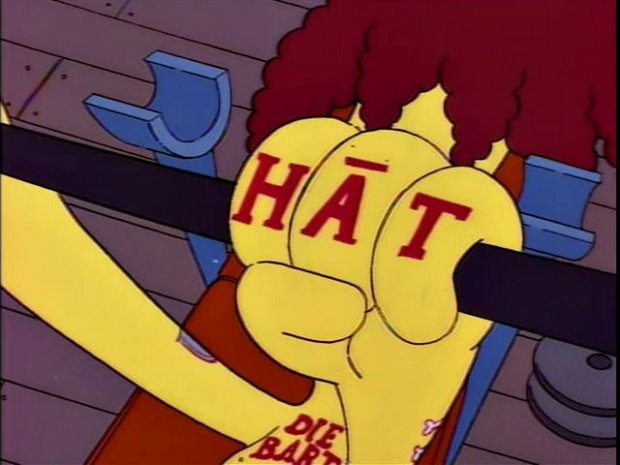 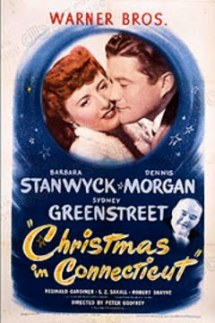 It’s hard to believe we’re already down to the final month of 2012, but leave it to TCM to end the year on a high note!  There is so much going on that I’m excited for.  First and foremost, we get Barbara Stanwyck as Star of the Month!  Every Wednesday night in December will kick off a 24-hour block of Stanwyck movies, and since I know a lot of my readers are big Stanwyck fans, you’ll want to make sure you’ve got plenty of room on your DVRs.  Every Friday night this month will be a salute to director Ernst Lubitsch, so you know every Friday night is going to be good.

Naturally, you can expect plenty of Christmas movies throughout the month.  Also worth noting is Baby Peggy night on December 3rd.  Baby Peggy is one of the last surviving stars from the silent era and was recently the subject of the documentary Baby Peggy: The Elephant in the Room, which will be airing on TCM that night along with some of her movies.

END_OF_DOCUMENT_TOKEN_TO_BE_REPLACED 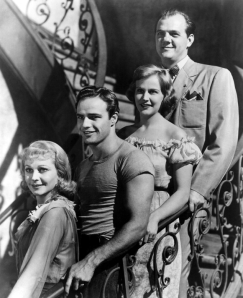 Happy March, everybody!  There are plenty of things I’m looking forward to on TCM this month!  First of all, there’s the tail end of 31 Days of Oscars.  The end of 31 Days of Oscars means the return of Silent Sunday Nights, and it’s back with some excellent silents.  Lovers of pre-codes should definitely keep an eye on the schedule this month because I noticed quite a few pre-codes mixed in there.  Starting this month, Drew Barrymore will take over Alec Baldwin’s co-hosting duties for The Essentials.  Karl Malden is the star of the month and I haven’t seen very many of his movies, so this is a good chance for me to see more of his work.  Every Monday night this month will feature films from the British new wave era, which is something I’m very eager to see.  So, let’s get on to all my highlights for the month:

END_OF_DOCUMENT_TOKEN_TO_BE_REPLACED 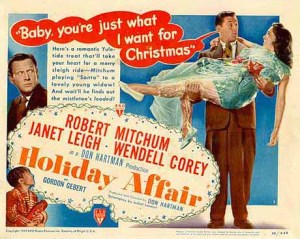 After her husband is killed in World War II, Connie Ennis (Janet Leigh) supports herself and her son Timmy (Gordon Gebet) by working as a comparison shopper.  When she is sent to Crowley’s to pick up an expensive train set, salesman Steve Mason (Robert Mitchum) suspects she might be a comparison shopper, but doesn’t report her like he’s supposed to.  When she takes the train set home with her at the end of the day, little Timmy peeks inside the box and assumes it’s a Christmas present for him and is disappointed when his mother explains it isn’t for him.  That night, Connie’s lawyer boyfriend Carl (Wendell Corey) drops by and as he and Connie are cleaning up, he asks her to marry him.  They’ve been dating for a while, but Connie isn’t sure if she’s ready to move on yet and Timmy isn’t too thrilled about the idea of her getting re-married to Carl.

The next day, Connie goes back to the store to return the train set and Steve tells her that he ought to report her to security.  Afraid of losing her job, she tells Steve about how her husband died in the war and that she’s only trying to take care of her son.  Steve has a heart and decides not to turn her in and refunds her money, but he loses his job because of it.  Now that he has the afternoon off, Steve tags along with Connie for an afternoon of comparison shopping and hot dogs in the park.  Later, Connie and Steve get separated in a crowd while Steve was carrying some of her packages.  He drops by her apartment to return the packages at the same time Carl is visiting.  Immediately, there’s a lot of tension between Carl and Steve and when Timmy meets Steve, it’s clear Timmy prefers Steve over Carl.  However, when Steve suggests that she’s trying to make Timmy into her dead husband, Connie gets so mad that she decides she wants to marry Carl after all.  But before Steve leaves, he goes to say goodbye to Timmy and finds out just how badly he wanted that train set.

On Christmas morning, Timmy wakes up early and when he goes to bring the milk in, he finds a mysterious package by the door from Santa: the train set he wanted.  Timmy is thrilled, but Connie isn’t sure if it came from Steve or Carl.  She quickly finds out it’s really from Steve and, unwilling to accept such an expensive present, she tries to find him to pay him back for it.  She eventually finds Steve in the park, now homeless, but he refuses to take money for it.  After Steve exchanges gifts with some other people in the park, he winds up with a pair of salt and pepper shakers.  But when Steve gets accused of mugging a guy and taking his money and salt and pepper shakers, Connie, Carl, and Timmy go down to the police station and talk to the police lieutenant (Harry Morgan) to clear his name.  After Steve is released, Timmy insists that Steve join them for Christmas dinner.  They all have dinner with Connie’s in-laws and after Connie’s father in law makes a toast to his wife, Steve is inspired to declare his love for Connie.  Connie asks Steve to leave and plans to go ahead with her marriage to Carl, but as a few days pass, Carl realizes that Connie really loves Steve.  By the time New Year’s Eve rolls around, Steve is all set to go to California for work, but Connie and Timmy join him on the train at the last minute to start a new life together.

I saw Holiday Affair for the first time a couple of years ago and it quickly became one of my Christmastime favorites.  Simply put, it’s very sweet, heartwarming, and thoroughly charming.  I enjoyed getting to see Robert Mitchum in a totally different type of role for him.  At the time, he was best known for being in film noir and crime movies.  But after he got busted for possession of marijuana and spent some time in jail, Howard Hughes, who was then the head of RKO, forced him into doing a wholesome movie to repair his image.  Because something like a 43 day jail sentence is totally a surefire way to destroy a tough guy image!  Mitchum’s image came out unscathed, even if Holiday Affair wasn’t a smashing success when it was first released.  Maybe its lackluster success had something to do with the fact that one of the posters they used to promote it makes it look like a film noir, not a heartwarming comedy: 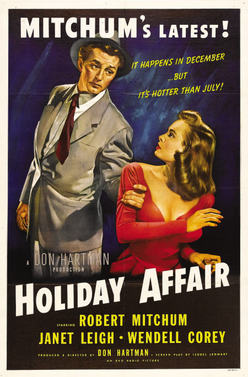 Seriously, if I didn’t know better, I’d think Janet Leigh was a femme fatale up to no good and Robert Mitchum is either there to catch her red-handed or be her partner in crime.  Perhaps it’s a movie about some big heist planned for the holiday season.  The last thing I get from that poster is a hard-working widowed mother and a kind-hearted drifter.  The poster at the beginning of this post is a far better representation of Holiday Affair.

Another week, another ten movies!  Up this week: Jacques Tati, Marion Davies, and The Ramones.  No, really.  You’re not going to see that combination on any AFI lists!  We’re already up to the halfway point…