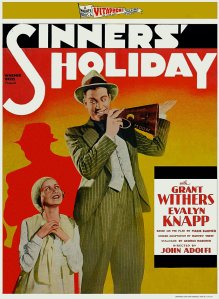 Running a penny arcade is a family affair for Ma Delano (Lucille LaVerne) and her grown children Jennie (Evalyn Knapp), Joe (Ray Gallagher), and Harry (James Cagney).  Mitch (Warren Hymer) runs a sideshow near the Delano’s arcade, but it’s actually a front for his bootlegging operation.  Ma Delano despises alcohol and wishes Mitch would just go away, but she has more ties to it than she’d like.  Her daughter Jennie is dating Angel Harrigan (Grant Withers), Mitch’s former sideshow barker.  And unbeknownst to her, Harry has gotten involved in Mitch’s racket.

After Mitch gets picked up by the cops, Harry starts running the bootlegging business himself and helping himself to the profits.  When Mitch gets out of jail and finds out how Harry has been running things, he’s out for blood.  Mitch confronts Harry, but Harry shoots and kills Mitch.  Harry tries to get his girlfriend Myrtle (Joan Blondell) to cover for him with the police.  However, he tells the truth to his mother and she tries to frame Harrigan for the whole thing.  But what they don’t realize is that Jennie witnessed the confrontation between Harry and Mitch.

Sinners’ Holiday isn’t a terrible movie, but there are plenty of far better movies out there about bootleggers.  However, Sinners’ Holiday is very noteworthy for being the film debut of James Cagney.  Sinners’ Holiday was based on a play called “Penny Arcade,” which had a brief run on Broadway.  Cagney and Blondell were in the play together and even though the critics didn’t care for the show, they did like Cagney and Blondell.  As fate would have it, one of their admirers happened to be Al Jolson.  Jolson thought the story might work well as a movie so he bought the rights and sold them to Warner Brothers with the stipulation that Cagney and Blondell play the same roles they had in the stage version.

Even though the movie isn’t particularly great, it’s easy to see why Jolson made sure to insist on Cagney being included in the film version.  He is by far the biggest reason to watch Sinners’ Holiday.  If I didn’t know better, I wouldn’t have even guessed that this was his film debut.  Not only does he get an extremely generous amount of screen time for someone who had never made a movie before, he plays the part as though he’d already been playing gangster types for years.  Not a bad way to get a start a movie career.