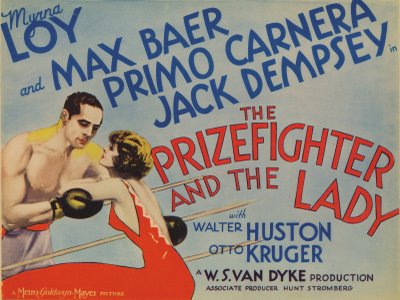 While at a bar one night, boxing manager Edwin J. Bennett, AKA: Professor, (Walter Huston) sees sailor Steve Morgan (Max Baer) knock out a couple of drunks.  The Professor sees that Steve has the potential to be a great boxer and convinces Steve to let him train him.  While the two of them are jogging on a country road one day, another car rolls over into a ditch.  Steve goes to help and pulls singer Belle Mercer (Myrna Loy) out of the wreck.  He takes her to a nearby house and makes sure she’s okay.  To repay the favor, Belle agrees to go to one of Steve’s fights.

Steve is quite infatuated with Belle and is thrilled when she comes to see him, but he soon finds out that she’s the girlfriend of gambler Willie Ryan (Otto Kruger).  That doesn’t deter him from pursuing Belle, though.  He keeps on trying and eventually he wins her over and they get married.  News of their marriage comes as a shock to Willie, but he vows to kill Steve if he ever does anything to hurt Belle.

Belle is a very devoted wife and does everything she can to support Steve’s career, but he isn’t as dedicated to her.  As his career rises, his ego spirals out of control and he starts seeing other women.  She knows what’s going on and after catching him in a lie, she tells Steve that if he messes up again, she’s gone.  Steve promises to behave, but when he hits the road with a vaudeville act, the showgirls are just too tempting.  Belle stays true to her word and goes back to Willie and gets her job back singing in his nightclub.  Steve works his way up to a championship match, but without Belle’s support, he gets depressed and starts hitting the bottle.  On the night of the big fight, Belle goes to the match hoping to see Steve get knocked out.  But as the fight progresses, Belle realizes she still does love him.

The Prizefighter and the Lady was a pretty darn engaging film.  In regards to Myrna Loy’s career, I’m not sure why I haven’t really heard much about her work in this movie because I thought she was great in it.  She made a very sympathetic wife and her quip, “Mother said there’d be days like this,” as Belle is helped out of the car wreck is pure Myrna Loy.  I loved that so many real-life boxers like Max Baer and Primo Carnera appeared in it; the fight scenes were terrific.  My only complaint about this movie was the musical number.  Yes, there really is a musical number in this movie about a boxer.  It didn’t add much of anything to the story and it just slowed down the whole thing.  Other than that, though, it’s a great movie.