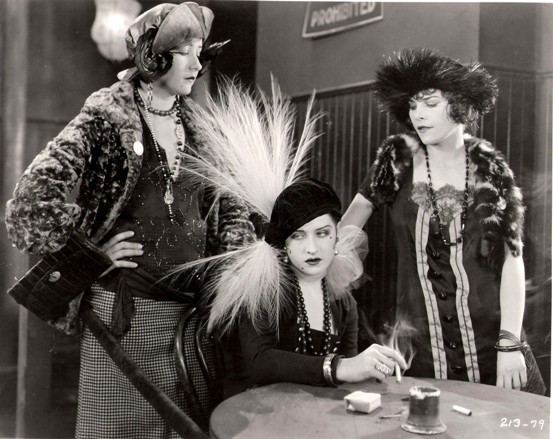 When two girls are born at roughly the same time, they go on to lead very different, yet somehow similar, lives. There’s Molly (Norma Shearer), whose father was a convicted criminal and was sentenced to prison by Judge Banning (Fred Esmelton) shortly after Molly was born. Life wasn’t easy for Molly; as she grew up, she lost her mother and ended up in a reform school. Meanwhile, Florence (also Norma Shearer) was the daughter of Judge Banning and happened to be born around the same time as Molly. She enjoyed a life full of privilege and got to attend an excellent boarding school, but like Molly, she also lost her mother.

Both Florence and Molly graduate from their respective schools at about the same time. Molly gets a job as a dime-a-dance girl in a bar and gets together with her boyfriend Chunky (George K. Arthur). One day, a customer gets out of line with her and Chunky tries to put a stop to it. When the customer overpowers Chunky, his friend David (Malcolm McGregor) steps in and puts a stop to things. She’s immediately taken with David. While Chunky is the type of person Molly is accustomed to being around, David is an aspiring inventor and more polished. Although Molly loves David, he only sees her as a friend, but Chunky is jealous of the attention Molly starts giving his friend.

When David announces he has an invention that will open any safe, Chunky thinks criminals would pay hand over fist for it, but Molly encourages him to sell it to bankers so they can use it to keep criminals out. Following Molly’s advice, David presents his invention to the board of directors at a bank, which Judge Banning just happens to be part of. Not only does the board of directors love his invention, he also has the chance to meet Florence, who is also instantly smitten with him. David falls in love with Florence and although she cares about him, she doesn’t have the heart to pursue him when she meets Molly and sees that she loves him. But when Molly realizes how much he loves Florence, she only wants to see him happy.

Lady of the Night is nothing Earth shattering, but it’s a very pleasant little movie. Usually when a movie has an actor or actress playing a dual role, the end result can feel really gimmicky, but this is one movie that seems to actually pull it off; possibly because Florence and Molly only have one scene together. If you’re a big fan of Norma Shearer, Lady of the Night is well worth your time. She’s great in both roles, but I’m particularly fond of her performance as bad girl Molly, especially when she gets to wear that huge, spectacular feathered hat. This also happens to be one of Norma’s earliest films where she has a major role that’s widely available to the general public (He Who Gets Slapped is a year older and is the earliest of her movies that I know of to have a DVD release.)