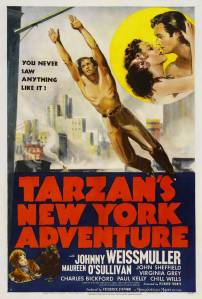 When Tarzan (Johnny Weissmuller) finds out that some people working for a circus have come to his jungle to capture animals for their show, he warns them to leave.  They agree, although, Boy (Johnny Sheffield) is very curious about the airplane they came in and keeps trying to hang around it.  Just as the circus workers are about to go back to America, they see Boy near their plane.  Boy shows off some of the tricks he can get the animals to do, and one of the workers realizes that he’d be a great asset to the circus so he takes him to New York with them.  When Tarzan and Jane (Maureen O’Sullivan) find out where their plane was headed, they trade in some gold for new clothes and plane tickets and head on over to New York with Cheeta along for the ride.

Naturally, there are lots of opportunities for Tarzan to be confused by civilization and for Cheeta to wreak havoc.  They manage to find out where Boy is, but they have to go through the courts to get him back.  Tarzan and Jane are honest when questioned, but Tarzan doesn’t like it when Jane has to admit they aren’t Boy’s birth parents and decides to get Boy back his own way.  He jumps out the window and starts swinging between the skyscrapers and later ends up diving off the Brooklyn Bridge to get away from the police.  He makes his way back to the circus and nearly rescues Boy, but the circus workers trap him.  Tarzan and Boy manage to escape with some help from their animal friends and although the Judge sentences Tarzan to jail, he suspends the sentence, allowing the happy family to return to the jungle.

Tarzan’s New York Adventure is hardly great cinema, it’s not even the best of the Johnny Weissmuller Tarzan movies.  It’s completely silly and ridiculous, but I can’t help but have a soft spot for it just because it really makes me laugh.  Cheeta’s antics were pretty amusing and the scenes of Tarzan swinging his way through New York City were pretty cool.  Tarzan’s New York Adventure is noteworthy for being the last Tarzan film made at MGM and for being the last time Maureen O’Sullivan played Jane so this was a fun way for them to end their time with Tarzan.  Not quite as good as Tarzan, the Ape Man or Tarzan and His Mate, but  lots of fun nonetheless.