For Francois (Jean Gabin), the day started out like just another day, but that all changes when he gets a visit from Valentin (Jules Berry).  The two of them get into a fight, Francois shoots Valentin and Valentin collapses on the stairs outside of Francois’ apartment.  A crowd gathers outside, police surround the building, and Francois holes himself up in his apartment.  The police begin shooting at him, but he dodges all their bullets and starts looking back at how he got himself in this position.

He thinks back to one day when he was working in a factory when a woman named Francoise (Jacqueline Laurent) drops by to deliver some flowers.  He starts talking to her and the two of them really hit it off.  They start seeing each other and about a month later, he’s madly in love with her.  But then one night, she says she can’t see him because she’s meeting someone else that night.  Curious, Francois follows her to a club where she watches Valentin, an animal trainer, perform.  Francoise is clearly happy to see him and while Francois is hiding in the back by the bar, he is approached by Clara (Arletty).  Clara had been Valenitn’s assistant and had dated him, but has had enough of being jerked around by Valentin.

Even though Francois and Clara start having an affair and Francoise and Valentin are still seeing each other, Francois still sees Francoise and loves her.  One day, Valentin comes to see Francois and tells him that he’s not interested in Francoise romantically, he’s really her father and he had abandoned her twenty years earlier and left her in an orphanage.  When Francois tells her about this, she tells him it isn’t true.  By now, Francois has all the proof he needs of just how big of a manipulative jerk Valentin is.  One evening, Valentin comes by Francois’ apartment to confront him and the two of them get into a vicious argument.  After Francois dangles Valentin out of a window, Valentin pulls a gun out of his pocket.  But then Francois takes the gun from him and shoots him.  Valentin stumbles out of his room as we saw at the beginning of the film.

I’m very glad that I recorded Le Jour se Leve because this is a movie I’m going to want to watch again.  First of all, Jean Gabin was amazing in it.  Even though this was made a few years before the golden age of film noir, the subject matter and the use of flashbacks made it very film noir-esque.  It’s got some wonderful camera work and cinematography, the final shot of the movie is particularly haunting.  This movie was remade by RKO in 1947 as The Long Night starring Henry Fonda, Ann Dvorak, Vincent Price, and Barbara Bel Geddes.  RKO had wanted to have all copies of Le Jour se Leve destroyed, but thankfully they did not succeed in that because they would have destroyed one of the finest French films of all time. 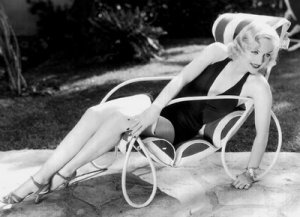 It’s that time of year again!  Let Summer Under the Stars commence!  I love this year’s line-up.  Even though there are plenty of the usual SUTS suspects like Bette Davis, Cary Grant, and Jimmy Stewart, more than half of this year’s stars have never been part of SUTS before.  And many of those who have been featured before, haven’t been featured in quite a few years.  Let’s take a look at the full list of stars: