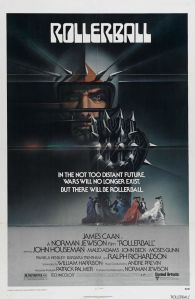 What do you get when you combine roller derby, motocross, and basketball?  You get rollerball, and in the year 2018, it’s all the rage.  What Babe Ruth was to baseball, Jonathan E. (James Cann) is to rollerball.  It’s a brutal, often deadly, game that Jonathan has managed to be on top of for the past ten years.  To honor Jonathan’s achievements, Bartholomew (John Houseman), head of  the corporation that controls the rollerball team he plays on, announces there will be a television special dedicated to his outstanding career.  There’s just one catch — Bartholomew wants Jonathan to use the special to announce his retirement.

Jonathan has absolutely no intention of retiring and he can’t find out why they want him to retire so badly.  In this society, the whole world is run by corporations and the corporations want to manipulate everybody.  What Jonathan doesn’t know is that rollerball was created by these corporations as a way to show how futile individuality is and Jonathan’s continued success at the game completely defeats its intended purpose.

When Jonathan refuses to announce his retirement on the TV special, the corporations start changing the game to make it more and more dangerous, hoping he will either step down or be killed.  No matter what the corporations throw at him, Jonathan still won’t back down, even when the game becomes extremely deadly.

I didn’t think I would like Rollerball very much, but I was surprised by how much I enjoyed it.  It’s an intelligent science fiction/action film, very heavily influenced by George Orwell and Stanley Kubrick’s A Clockwork Orange.  The use of music is quite haunting and the action scenes are excellent; James Caan was best in the game scenes.  It could have stood being a little bit shorter, but I’m very glad I decided to check this one out. 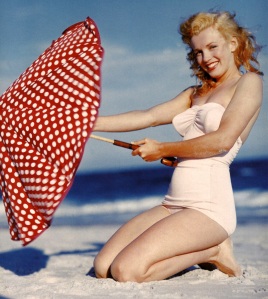 How is it already time for another round of Summer Under the Stars?!  As usual, TCM has done a great job of coming up with a nice blend of stars who are no strangers to the SUTS schedule and stars who have never been featured before.  The more I look at the schedule, the more excited I get to start my Blogging Under the Stars marathon.

Some of the days I’m most looking forward to are: Myrna Loy (August 2), Marilyn Monroe (August 4), Toshiro Mifune (August 9), Ginger Rogers (August 12), James Cagney (August 14), Lillian Gish (August 15), Jack Lemmon (August 22), Gene Kelly (August 23), Kay Francis (August 21), and Warren William (August 30).  I have seen woefully few Akira Kurosawa films, so I am really looking forward to Toshiro Mifune’s day.  As a fan of silents and pre-codes, I was thrilled to see Lillian Gish, Kay Francis, and Warren William got spots on this year’s line-up.  Lately, I’ve been really getting into Tyrone Power movies, so I’m glad to see he got a day this year.  And since I’ve always wanted to see more Jeanette MacDonald movies, I’ll definitely be tuning in a lot for her day.

The complete Summer Under the Stars schedule is available to be download here.