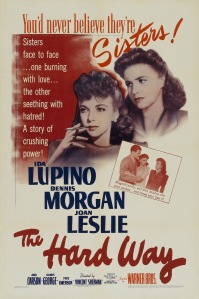 After the death of their mother, Helen Chernen (Ida Lupino) does her best to raise her younger sister Katie (Joan Leslie). They live in the dismal industrial town of Greenhill, which doesn’t offer many prospects for a bright future. Helen never made it out of Greenhill, but she’s bound and determined for Katie to have a better life. When Katie catches a performance by Paul Collins (Dennis Morgan) and Albert Runkel (Jack Carson) at a vaudeville show, it inspires her to become to go into showbiz herself. Later that night, Katie announces her new ambition to her friends and acts out part of Runkel and Collins’ act, which happens to be witnessed by Runkel and Collins themselves. They’re impressed with her talent and invite her to join the act. Albert is immediately smitten with Katie and they are soon married.

With Katie on the road with Runkel and Collins, Helen tags along to manage Katie’s career and constantly tries to get Katie more time in the act. Eventually, Helen gets Katie her a gig of her own. It’s just a small role initially, but Helen makes sure she gets a promotion by sabotaging the rehearsal of experienced actress Lily Emery (Gladys George). Opening night is a smashing success and opportunities abound for Katie, but when Albert calls to congratulate her, Helen starts trying to drive them apart. It isn’t long before Katie becomes more famous than Albert and when Albert realizes that he can no longer get work on his own without using Katie’s name, he kills himself, sending Katie into an alcohol-fueled downward spiral.

When Katie’s behavior causes a theater producer to find a replacement for her in his show, Helen insists on producing the show herself. One night, Katie runs into Paul, who has moved onto a career as a bandleader. They start seeing each other and Katie is the happiest she has been in years. When they decide to get married, Katie is ultimately left to choose between Paul or Helen.

Not one of the all-time-greats, but The Hard Way is a really strong drama that deserves a bit more recognition. The entire cast absolutely hits it out of the park. Ida Lupino was absolutely glorious as the cold, steely, ruthless Helen.  Joan Leslie is likable and fresh, Jack Carson and Dennis Morgan were great, and Gladys George totally owned her brief role. This is exactly the sort of material director Vincent Sherman excelled at working with. Definitely keep an eye out for The Hard Way; it’s well worth your time.

After eight years of marriage, Eve (Joan Fontaine) and Harry (Edmond O’Brien) Graham decide to start the process of adopting a child.  They go to see adoption agent Mr. Jordan (Edmund Gwenn), who insists on conducting thorough background checks on his applicants.  Eve isn’t bothered at all by this, but Harry has reason to be concerned.  Since Harry often works out of town in Los Angeles, Mr. Jordan makes a trip out there to do some investigating.  Although Harry claims to stay in hotels when he’s in town, strangely, he isn’t checked into any of them and some hotel owners say he hasn’t been around in a while.  It isn’t long before Mr. Jordan tracks Harry down to a house where he is found living with a baby and another woman.

The only thing Harry can do is tell Mr. Jordan how he wound up in this situation.  It all started several months earlier when Harry was stuck in Los Angeles on business.  He had been feeling particularly lonely one night, so he distracts himself by going on a bus tour of movie stars’ homes.  He ends up sitting next to Phyllis Martin (Ida Lupino) and tries to strike up a conversation with her.  At first, she isn’t interested, but she warms to him and asks him to dinner after the tour.

Harry and Phyllis have a pleasant evening together, but Harry never intends for it to become anything more serious.  Later, Harry calls Eve to tell her about Phyllis, but Eve doesn’t take him seriously.  When Harry returns home, he finds Eve very distant and not interested in his suggestion of taking a vacation together.  Back in Los Angeles, Harry turns to Phyllis for companionship again but  this time, it turns into a real relationship and Phyllis soon becomes pregnant.  Harry plans to leave Eve, but doesn’t have the heart to so soon after the death of her father.  Not knowing what else to do, he proposes to and marries Phyllis.

With his secret out in the open, Harry decides to leave Phyllis and go home to Eve.  But after being reunited with Eve, Harry finds police officers waiting to arrest him for bigamy.

The Bigamist wasn’t one of my favorite movies, but it was certainly intriguing.  You just don’t see many movies that deal with the subject of bigamy and it’s certainly not a subject many people would expect in a movie from the 1950s.  Not only is it an unusual subject, it was also directed by Ida Lupino, so we get to see this unusual subject told from a woman’s perspective, another rarity for the 1950s.

The Bigamist features some very strong performances from its three lead actors and has some fine direction from Lupino.  And the fact that it was directed by a woman undoubtedly added some very interesting elements to it.  Even though Eve and Phyllis are married to the same man, there is no animosity between them when they meet in a courtroom.  No confrontations, no catfights, no snarky remarks to each other.  Even though most of the movie is told from Harry’s perspective, who is trying to be seen as sympathetic, it’s ultimately Eve and Phyllis who remain the most sympathetic throughout the movie.

Even though The Bigamist may not be one of the all-time great movies, it has a lot going for it that makes it worth taking a look at.

Hard to believe it’s already almost June!  June’s Star(s) of the Month are Teen Idols.  Every Thursday will be showcasing movies starring the likes of Elvis, Frankie and Annette, The Monkees, and Troy Donahue.  TCM will also be doing a series called The Immigrant Experience every Wednesday night this month.  June 10th is a very noteworthy day as it marks what would be Judy Garland’s 90th birthday.  TCM will be celebrating by playing her movies for a full 24 hours, all chosen by noted Judy Garland expert John Fricke.  The Essentials, Jr. series also makes its return to Sunday nights this month.