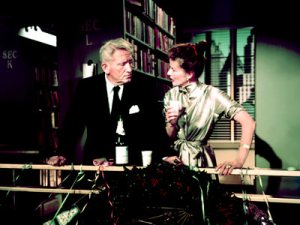 Bunny Watson (Katharine Hepburn) and Peg Costello (Joan Blondell) are both happily employed by the Federal Broadcasting Network in the research department.  If anyone needs to know something, anything from the names of Santa’s reindeer to information about the movie King Solomon’s Mines, they’re the ladies to ask.  They love their jobs, but their lives are turned upside down when efficiency expert Richard Sumner (Spencer Tracy) starts hanging around the research department all of a sudden.  The Federal Broadcasting Network is planning a big merger, but keeping quiet about it, and has brought Richard in to determine how an EMERAC computer could help some departments deal with the increased workload once the merger is complete.  Of course, having an efficiency expert hanging around makes the gals in the research department a little nervous.  The last thing they want is to be replaced by a computer.  Richard is a bit quirky, but Bunny takes a liking to him.

But at the same time, Bunny has been dating network executive Mike Cutler (Gig Young) for seven years without any hint of a proposal coming.  Peg insists that it’s because Bunny makes herself too available.  Mike and Richard are two very different guys.  When Mike asks Bunny out, he’s planning a weekend in the country and a dance at a country club.  But when Richard asks Bunny to lunch, he brings take-out to the roof of the building in December.  On the day Mike was supposed to bring Bunny to the country for the weekend, he cancels at the last minute.  At the end of the day, Richard gives Bunny a hand with the luggage she brought with her and because it’s pouring rain, Bunny invites Richard to have dinner at her apartment and dry off.  They are quite surprised when Mike pays a sudden visit and Mike is none too pleased to see Bunny hanging out with another man.

At the company Christmas party, the research department parties like it will be their last Christmas party.  Champagne for everyone!  Just as Bunny thinks she’s about to get what she really wants, a proposal from Mike, Mike is called up to see the head of the company.  When he returns, he comes bearing the news that he’s been promoted to vice president!  He tells Bunny that he’s going to take her out to the west coast to get married ASAP, but suddenly Bunny doesn’t want to go with him.  Things get even worse when Miss Warriner from Richard’s office comes by to measure things for an EMERAC computer to be installed.  The ladies in research are sure their jobs are done for and it looks like their worst fears are confirmed when they all get pink slips with their paychecks.  They start packing their things, leaving  Miss Warriner to deal with all the questions coming in.  Miss Warriner is completely overwhelmed and Richard doesn’t understand why they aren’t helping out.  But then they realize that everybody got pink slips because the computer installed in Payroll made a mistake and fired everyone.  With everything cleared up, Richard tries to give Bunny what she longs for: a proposal.  Bunny is convinced that Richard could never love her as much as he loves that computer, but for once, is proven wrong when she hits the computer’s reset button and he hugs her.

Desk Set was the eighth movie Spencer Tracy and Katharine Hepburn made together and even though it isn’t as good as some of their earlier pairings like Woman of the Year or Adam’s Rib, it’s a pretty cute movie.  Kate and Spencer were delightful together as always, and I liked Kate and Joan Blondell together as well.  They looked like they were having so much fun in the scene where Bunny and Peg are drinking champagne and getting tipsy during the Christmas party, they made me want to pour myself a glass of champagne and join them.  I also really liked the part where Richard is at Bunny’s apartment and Bunny and Richard are trying to explain to Peg how Richard ended up there.  There’s a moment when Richard walks off camera for a moment and walks back on camera acting like a crazy drunk person and Bunny and Peg start laughing hysterically.  Spencer Tracy improvised that part, so the ladies’ uncontrollable laughter was real.  It was just so cute seeing Katharine Hepburn crack up like that.  Even if it wasn’t the strongest of the Tracy/Hepburn movies, I really enjoyed it.