If I were to make a list of movie characters I would be most afraid to run into in a dark alley, Mrs. Hammond as played by Gale Sondergaard in The Letter would absolutely be on that list. To say Mrs. Hammond carried an imposing aura about her would be an extreme understatement. But what blows me away is how she manages to be so incredibly menacing while not seemingly doing very much. She doesn’t yell, she doesn’t slap or punch anyone. Instead, she spends most of her time on screen standing still and glaring. But she stands still and glares more terrifyingly than anyone.

Mrs. Hammond hardly has any lines at all and the few she does have aren’t in English. All of her movements are extremely controlled; even when she’s stabbing Leslie to death.  All of her power comes from her facial expressions and her incredibly tense posture. If anyone ever looked at me the same way Mrs. Hammond looked at Leslie Crosbie, I would be running for my life. I aspire to glare at people half as well as Mrs. Hammond. Stealing scenes from Bette Davis was no easy feat, but Gale Sondergaard did so in a spectacular way.  It’s a brilliant example of how sometimes, things are more unnerving because of the things a person doesn’t do. 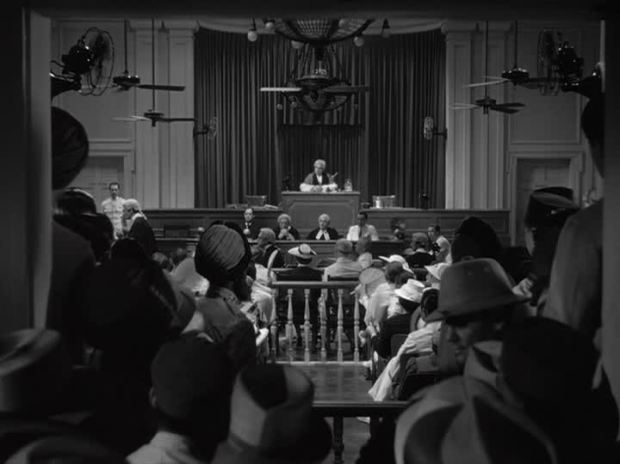 I always associate this movie with summer because it does such a good job of conveying how hot it was at the time of this incident. I could watch it in the dead of winter and it would still make me feel like I should be turning on a fan.

That is the fiercest glare I have ever witnessed.

I don’t usually care much about wind chimes, but they are used to brilliant dramatic effect here.

7.  Mrs. Hammond’s entrance when Leslie has come to see her.

Aside from being deadly, they’re so ornate.

10. The fact that this movie gave us one of my favorite behind-the-scenes pictures.

Bette Davis with her stand-in. 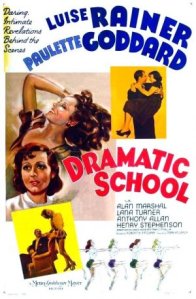 By day, Louise Mauban (Luise Rainer) is a regular, albeit promising, dramatic school student.  But by night, she’s always out on the town living the high life with her boyfriend Marquis Andre D’Abbencourt (Alan Marshal).  Well, not really.  That’s just what she tells all her classmates.  The reality is that she works the night shift in a factory to support herself and she doesn’t want to tell her classmates the real reason why she can’t go out with them at night.  She concocts this story one day after Andre visits the factory she works at with his actress girlfriend so she can study the workers for a role she’s playing.  Some of her classmates believe her stories, but others are more skeptical.

No one is more skeptical than Nana (Paulette Goddard), and one night her suspicions are confirmed when she and her boyfriend run into Andre during one of their nights out.  When Nana mentions Louise to Andre, he’s never heard of her.  Nana is awfully catty, so she decides to throw a swanky party and invite both Andre and Louise so that when they meet in front of all their classmates, Louise will be humiliated when he doesn’t know her.  On the night of the party, Andre and Louise both do show up, but Andre has been tipped off about Nana’s plan and doesn’t have the heart to play into it.  He walks in and pretends like he and Louise know each other well, much to Louise’s astonishment.  But then Andre begins to actually fall in love with Louise and he starts showing her the life she’d only known in her mind.  He buys her beautiful clothes, takes her out on the town, and sets her up in a nice new apartment.

But the good times can’t last forever.  One day at school, Louise faces the wrath of her teacher Madame Charlot (Gale Sondergaard).  Madame Charlot was already hurting from being told she’s too old to play Joan in a production of Joan of Arc.  So when Louise gets under her skin, she takes it out on her by promising to have her expelled.  But rather than get upset, Louise thanks Madame Charlot because the suffering will help her become a better actress.  But Louise’s day takes another turn for the worse when she comes home to a letter from Andre breaking things off.  She lets all of her classmates have things Andre has given her and gives Nana the break-up letter because she thinks it will make her happy.  Instead, Nana and Louise end up becoming friends after that.  Louise boldly goes to school the next day and instead of being yelled at by Madame Charlot, she finds out that Madame Charlot has recommended her for the part of Joan in Joan of Arc.  Of course, Louise gets the part, becomes an overnight sensation, and Andre is left kicking himself for having left her.

I liked Dramatic School.  The story itself might not be particularly remarkable, but the cast made it work.  I loved Luise Rainer, Paulette Goddard made a great catty classmate, and Gale Sondergaard was an excellent choice for the aging actress/teacher.  And it was fun to see people like Lana Turner, Ann Rutherford, and Virginia Grey pop up in the supporting cast.  It’s an enjoyable little movie and with a runtime of only 80 minutes, I’d say it’s worth checking out the next time it’s on TCM.