Terry Riley (Pat O’Brien) and Johnny (Allan Jenkins) are telephone repairmen who aren’t exactly known for being employees of the month.  But rather than fire them, their boss Joe Flood (Eugene Pallette) decides to send them out on the worst jobs the phone company gets.  Much to Joe’s dismay, the tough jobs actually work out well for Terry and Johnny.

When Terry is sent to a job at a burning building, he saves the life of prominent businessman John P. Schuyler (Henry O’Neill) and Schuyler tells Terry that if he ever needs a favor, don’t hesitate to ask.  When Terry and Johnny are sent to take the phone equipment from fortune teller Madame Francis (Glenda Farrell), they end up exposing her as a fraud, but she seduces Terry and Johnny soon starts dating her.

One day, Terry is later sent to the hotel where Marie Lawson (Joan Blondell) works as a switchboard operator.  Marie had inadvertently helped Nicky (Gordon Westcott) use the phone system to bilk another hotel guest out of a lot of money and the manager wants to see if the phone had been tapped.  When Terry doesn’t find a phone tap, Marie loses her job.  But Terry is extremely attracted to Marie and before he gets her fired, he asks her out and she turns him down.  That night, he messes with the phone at her apartment so he can come and fix it.  While he’s at it, he ruins her dinner so she has no other choice but to go out with him.  But that night, Marie starts to come around to Terry.  He even goes to see Schuyler about getting her a new job.

Marie is very happy at her new job, but her trouble from her old job soon catches up with her.  It doesn’t take long for Nicky to find out where she’s working and he uses her to pull a huge scam on her boss.  Once again, Marie is left holding the bag and this time, she’s in so much trouble the story makes the news.   But with their knowledge of the phone system, Terry and Johnny are able to save her.

For the most part, I really liked I’ve Got Your Number.  Like many pre-codes, it’s fast paced and full of snappy banter and innuendo. Some of its scenes are extremely pre-code.  My biggest complaint about it is that Glenda Farrell was way underused. In fact, her entire character was pretty irrelevant to the story.  They could have cut her character out all together and it wouldn’t have made a big difference.  Glenda Farrell is by far one of my favorite pre-code actresses, so to see her so underused in I’ve Got Your Number was very disappointing.  But luckily Joan Blondell and Pat O’Brien helped make up for the lack of Glenda Farrell. 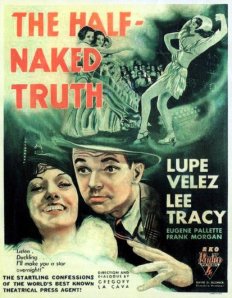 While working as the publicity man for a two-bit carnival, Jimmy Bates (Lee Tracy) decides that the best way to drum up some business is through a little good old fashioned speculation and controversy. When he announces that dancer Teresita(Lupe Velez) will name the man in town who fathered her and left her mother years ago during one of her performances, not only do people show up to get the dirt, a few men also slip him some money to keep their names out of it.

The police also take an interest in the story, but when they find out the whole stunt is a sham, they shut down the whole carnival and Bates, Teresita, and their friend Achilles (Eugene Pallette) jump in a car and head to New York.  Bates has promised Teresita that he’s going to turn her into a big star, so as soon as they make it to the city, he hits the ground running building hype for Teresita.  He brings them to the Ritz and convinces them that she’s a Turkish princess and they are given a nice suite.

Bates resorts to all sorts of crazy publicity stunts to get the newspapers talking about this mysterious princess. Merle Farrell (Frank Morgan) is the big Broadway producer in town and he’s flabbergasted when Bates tells the press that the princess will be starring in Farrell’s new show.  But when ticket sales increase, Farrell decides to go along with it. On opening night, Teresita’s dance is not a hit with the audience, so Bates stops the show, telling the crowd the dance was too sacred to be performed in public. He has Teresita sing a song instead and she becomes an overnight sensation. She’s now a star and Bates has a new gig as Farrell’s publicity man.

Even though Bates is in love with Teresita, she loses interest in him and starts setting her sights on Farrell instead. When Bates finds out about it, he takes some incriminating pictures of them together, and uses them to blackmail Farrell into giving a spot in his show to another girl he’s determined to turn into a big star.  With the public losing interest in Teresita, she and Achilles lose interest in New York so when he decides to buy the carnival they had worked at before, she leaves with him.  But New York just isn’t the same without those two and it isn’t long before Bates finds himself back at the carnival right where he started.

The Half Naked Truth is amusing, but not great. It’s the kind of movie I’m glad I saw once, but it’s not the sort of thing I’d go out of my way to watch again.  I got some laughs out of it, I liked the cast, but there wasn’t anything about it that impressed me so much that it became one of my favorites.