Happy January and happy 2015! I hope you had a nice holiday season. After all of the chaos of December, it’s time to relax with some TCM.

Overall, it’s a pretty calm month, but still has a lot to offer. January’s Star of the Month is Robert Redford, whose movies will be featured every Tuesday night this month. The theme for this month’s Friday Night Spotlight is movies based on the works of Neil Simon. On January 22nd, TCM will show a night of Debbie Reynolds movies in recognition of her receiving the Life Achievement Award from the Screen Actors Guild.

Now, let’s take a closer look at the schedule…

END_OF_DOCUMENT_TOKEN_TO_BE_REPLACED 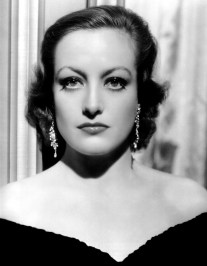 Happy new year!  I hope you all had a very happy holiday season. I had a lot of fun revisiting all my favorite holiday movies in December, but now it’s time to get back to watching more regular movies and luckily, TCM is going to make that transition very easy for me.

Break out the shoulder pads, eyebrow pencils, and Pepsi because Joan Crawford is the Star of the Month!  A marathon of Joan Crawford movies will start every Thursday night at 8:00 PM and each week will focus on a different era of Joan’s career.

This month’s installment of Friday Night Spotlight will feature Science in the Movies and is going to be hosted by Dr. Sean Michael Carroll, PhD, a senior research associate at the California Institute of Technology’s Physics department.

Other noteworthy things happening in January include Judge Judy as Guest Programmer, a celebration of past and present recipients of the Screen Actors Guild Life Achievement Award, and 24 hours of movies by Columbia Pictures to commemorate the studio’s 90th anniversary.  Now, let’s take a more detailed look at the line-up…

END_OF_DOCUMENT_TOKEN_TO_BE_REPLACED

Happy new year, everyone!  With winter officially underway, it’s very tempting to spend every night at home watching movies with a cup of hot chocolate, and TCM has plenty of reasons to do just that.

Another star who would be celebrating their 100th birthday this month is Danny Kaye.  If you only know him from White Christmas, be sure to tune in on January 20th because TCM will be playing his movies for a full 24 hours, including an episode of The Danny Kaye Show and an interview he did on The Dick Cavett Show.

END_OF_DOCUMENT_TOKEN_TO_BE_REPLACED

Lucky (Elvis Presley) has come to Las Vegas to participate in the big Grand Prix race.  The only problem is that his car needs a new engine.  He’s able to win the money he needs for a new engine, but his luck runs out while pursuing swimming instructor Rusty Martin (Ann-Margret).  While singing a song to her, he ends up taking an unexpected dip in the pool and loses his money.  Now not only does he need money for his engine, he needs money to pay his hotel bill, so he and his friend Shorty (Nicky Blair) get jobs as waiters at the hotel.  An added benefit of working at the hotel is now he can enter the employee talent show and win the money for his engine.

When Lucky first set eyes on Rusty, it was love at first sight, but Rusty isn’t so quick to fall for Lucky’s charms (no pun intended.)  But as she spends more time with him, she falls pretty hard for him, too.  The only problem is that Rusty doesn’t like Lucky racing cars, she’s afraid of him getting hurt.  Lucky doesn’t want to quit racing, but his rival Count Elmo Mancini (Cesare Denova) is also attracted to Rusty and would be willing to give up racing if the right woman came along.  She goes on a date with Mancini, but her heart still belongs to Lucky.

When the big talent show rolls around, Lucky and Rusty end up competing against each other.  Lucky wins, but it turns out there isn’t a cash prize after all.  But with some help from Rusty’s father (William Demarest), Lucky is able to get his engine, Rusty learns to stop worrying and love auto racing, and Lucky and Rusty can live happily ever after.

Elvis movies generally don’t have the best reputations, but Viva Las Vegas is one worth seeing.  From beginning to end, it’s nothing but fun.  Elvis truly found his perfect leading lady in Ann-Margret, it’s really too bad Viva Las Vegas was the only movie they made together.  The script has issues, but the chemistry between Elvis and Ann-Margret is so great, it’s easy to overlook those issues and just have fun with it. Not only does it have two fantastic leads, the songs are excellent.  I’m sure I’ll have the song “Viva Las Vegas” running through my head the next couple of days.  I’d say this and Jailhouse Rock are the two Elvis movies most worth seeing.