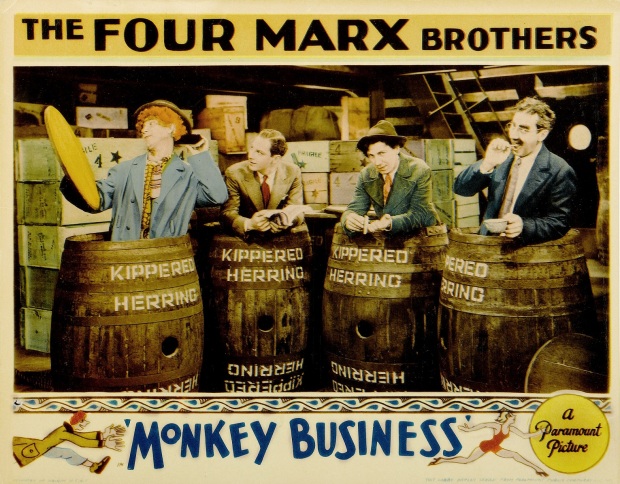 When Groucho, Harpo, Chico, and Zeppo are found as stowaways on a ship, they have to avoid being captured by running all over the place and trying to hide as best they can, whether it’s blending in with a puppet show, posing as musicians, or trying to pose as the ship’s barber. When Groucho tries hiding in a stateroom, it turns out the room is occupied by Lucille (Thelma Todd) and her husband gangster Alky Briggs (Harry Woods). Lucille is attracted to him and when Zeppo ends up coming in, he and Groucho end up being hired to be Alky’s bodyguards.

Meanwhile, Zeppo has met Mary Helton (Ruth Hall), daughter of Joe Helton (Rockliffe Fellowes) and rival to Alky. When Chico and Harpo find themselves in Helton’s stateroom while on the run, they end up becoming bodyguards for him. A big confrontation is about to happen between the two gangsters and their feud continues after the boat docks, putting Mary in danger and leaving it up to Groucho, Harpo, Chico, and Zeppo to save her.

Monkey Business is pure anarchy. Although the plots to all Marx Brothers movies are pretty thin and basically only exist to serve as a catalyst to mayhem, Monkey Business seems to be the one where the plot matters the least — but that’s not a bad thing in this case. The main plot of the movie doesn’t really kick in until quite a ways into the movie and the everything leading up to that is just an excuse to have the Marxes running around the ship, wreaking havoc wherever they go. With lesser comedians, this movie would be a complete disaster, but the Marx Brothers were completely on top of their game and that’s what makes Monkey Business a true comedy classic. The physical comedy is absolutely brilliant and the jokes are pure gold. The Maurice Chevalier impersonation scene will never stop being hilarious to me. If you’ve never seen a Marx Brothers movie, Monkey Business is definitely not a bad place to start. 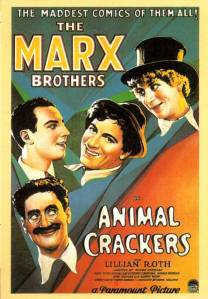 Mrs. Rittenhouse (Margaret Dumont) is hosting one of the biggest society events of the year at her home in Long Island.  Not only will renowned African explorer Captain Spaulding (Groucho Marx) be the guest of honor, another guest will be displaying a very valuable painting he’s recently purchased.  After Spaulding and his secretary Horatio (Zeppo Marx) arrive, musicians Signor Ravelli (Chico Marx) and The Professor (Harpo Marx) join the party.

As the party goes on, people start scheming to replace the valuable painting with a copy.  First are a couple of socialites who want to replace the painting with a poor copy to make Mrs. Rittenhouse look bad.  Then there’s Mrs. Rittenhouse’s daughter Arabella (Lillian Roth), who has been dating aspiring artist John Parker (Hal Thompson).  John and Arabella want to get married, but he doesn’t have enough money to support them.  Arabella comes up with the idea of replacing the original painting with a very good copy he’s made so everyone at the party will see it and be impressed by his work.  She convinces Ravelli and The Professor to help her switch the paintings.  With all the plans to change the painting, mayhem ensues.

Animal Crackers is, without a doubt, an essential Marx Brothers movie.  If I were to try to introduce someone to the Marx Brothers, Animal Crackers is the movie I would pick because it is such a perfect representation of the Marxes doing what they did best.  Anarchy?  Oh yeah, there’s plenty of anarchy.  Margaret Dumont as the wealthy dowager?  Yep, she’s there.  Non-stop quips from Groucho?  Not only does Groucho get plenty of great lines, he gets some of the most famous lines of his career like, “One morning I shot an elephant in my pajamas.  How he got in my pajamas, I don’t know.”  Harpo and Chico are great in it too, of course; even Zeppo has some pretty choice moments in it.  As far as the songs go, “Hooray for Captain Spaulding” and “Hello, I Must be Going” are some of Groucho’s signature bits.

Unfortunately, Animal Crackers now only exists in a censored form.  When the movie was re-released later in the 1930s, some of Groucho’s more risqué lines were cut to comply with the Hayes Code.  If you watch carefully during “Hooray for Captain Spaulding,” there is a jump cut after the line, “He was the only white man to cover every acre,” where a line was omitted. No prints of the original version are known to exist.  However, lots of Groucho’s risqué lines were left intact and can still be seen today.

If you’re a fan of the Marx Brothers, you’re not going to want to miss this brief technicolor clip of a rehearsal for the scene where Harpo makes his entrance.  Not only is it a treat to see color footage of Marxes at work, it’s noteworthy for showing Harpo out of costume.