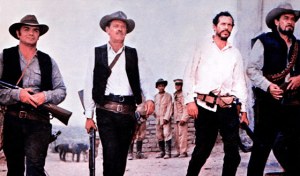 Pike Bishop (William Holden) is the leader of a gang of outlaws, but his gang isn’t the typical gang you might think of.  Almost all the guys in his gang are getting up there in years, but they have no delusions about their age.  They’re just looking to pull off one last big robbery that would give them enough money to retire on.  When the gang heads to San Rafael, Texas to rob a railroad office, they’re confronted by a band of bounty hunters led by Pike’s former partner Deke (Robert Ryan).  A shootout ensues that takes out a lot of Pike’s gang as well as several innocent bystanders.

The only surviving members of Pike’s gang are Pike, Dutch (Ernest Borgnine), Angel (Jaime Sanchez), and Lyle and Tector Gorch (Warren Oates and Ben Johnson, respectively).  As if their robbery didn’t go badly enough, they soon realize that they didn’t actually steal any money, they only stole a bunch of metal washers.  They start to head for Mexico, but hot on their trail is Deke and his gang of bounty hunters.  Once they get to Mexico, they begin to see the devastation of the Mexican revolution.  Angel is originally from Mexico, so he is particularly angry to see what has been done to his home village.  When they make it to Agua Verde, the gang meets Mapache, a general in the Mexican Federal Army.  Angel’s anger comes to a head when he sees Mapache, the person responsible for destroying his home, with one of his former girlfriends and he shoots the girl.  To stop Mapache from killing Angel, Pike works out a deal with him where his gang will steal a shipment of guns and ammunition from a train for them and they will be given $10,000 in gold.

$10,000 of gold sounds like a good thing to everybody except Angel.  He can’t bring himself to give them weapons so they can kill more of his people.  Angel gives up his share of the gold in exchange for taking a small part of the shipment and giving it to help people on his side.  When the big heist is set to go down, there’s one little surprise they hadn’t counted on — Deke and his bounty  hunters being on the same train as the guns.  But they pull it off and try to make it so that Mapache won’t notice the missing guns.  However, Mapache is not easily fooled and captures Angel and tortures him.  Pike and his gang are faithfully loyal to each other and try to save their friend, but instead, Mapache kills Angel in front of them.  Not willing to back down, the gang launches into one of the most epic gunfights in film history.

As many of you already know, I’m not the biggest fan of Westerns.  But to me, The Wild Bunch wasn’t so much a Western as it was a gangster movie/thriller that just happened to be set in the West instead of a city like New York or Chicago.  Some of the story elements felt like they could have come straight out of classic gangster or heist films if you just changed “guns and ammunition” to “valuable jewels.”  But even if I felt like I’ve seen some of the story elements before, Sam Peckinpah made them completely his own through his very distinct style.  It’s very taut, thrilling, and action packed.  And there’s no going wrong with that phenomenal cast!  This is one movie I think deserves all the acclaim it’s gotten.