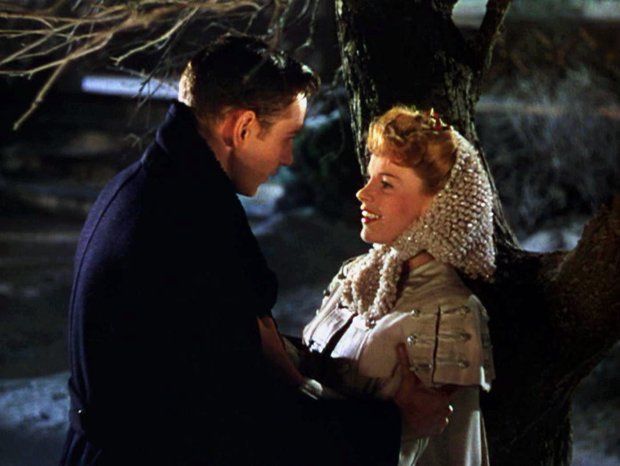 If there’s anything Christmas movies are known for, it’s for having heartwarming, sentimental themes. Of course, there are some notable exceptions out there, but those themes can be found at the core of many of the most beloved Christmas movies of all time. Every holiday season, millions of people get hit with a wave of nostalgia that makes them crave the wholesome, heartfelt entertainment that Christmas movies typically have to offer. While that’s a trend that never truly goes away, it can become particularly apparent when times are difficult, such as during times of war.

During the 1940s, World War II had a profound impact on the life of every American, whether they were serving in the war or back on the homefront. As the holidays approached, people were understandably longing for past Christmases that were spent together with family and friends. Even the most lighthearted movies can be a reflection of the era in which they were produced and 1940s Christmas movies are no exception. In fact, it was a driving force that helped make some of our most cherished holiday movies and songs so popular.

In 1940, Paramount Studios commissioned Irving Berlin to write a series of holiday-themed songs to use in a movie about an inn that only opened on holidays. While Holiday Inn was a box office success on its release, becoming one of the most successful movies of 1942, one of those Irving Berlin songs would go on to eclipse the movie’s success.

Nearly 80 years after its initial release, Bing Crosby’s version of “White Christmas” remains the best-selling record of all time and is widely considered one of the most significant American songs ever recorded, but Crosby initially didn’t think the song was anything exceptional. In fact, it was expected that the song “Be Careful, It’s My Heart” from Holiday Inn‘s Valentine’s Day number would be the biggest hit from the movie’s soundtrack. But while the movie was being filmed, the attack on Pearl Harbor occurred and moviegoers were in a different place by the time the movie was released. “White Christmas” struck a nerve with people who wanted to go back to simpler, safer times.

Considering the resonance it had with people during World War II, its prominent use in White Christmas twelve years later was much more than just an excuse to get Bing Crosby to reprise his signature song and sell more copies of it. It was a natural choice for a movie about two World War II veterans who reunite with their commanding officer.

During the golden age of Hollywood, each of the major studios had their thing they were known for. Universal had their horror movies, Warner Brothers had their gritty gangster movies, and MGM had musicals. Louis B. Mayer was very big on producing wholesome entertainment the whole family could enjoy and Meet Me in St. Louis is a prime example of that.

Meet Me in St. Louis follows the lives of the Smith family over the course of a year as they face an upcoming move from St. Louis to New York at the turn of the 20th century. Given the span of time the movie covers, it’s not strictly a Christmas movie, but the scene in which Judy Garland sings “Have Yourself a Merry Little Christmas” to Margaret O’Brien is enough to make it a holiday classic.

With audiences longing to be reminded more innocent times, Meet Me in St. Louis was exactly what many moviegoers were looking for at the time, but “Have Yourself a Merry Little Christmas” took that yearning to the next level. The version performed in the movie, written by Hugh Martin and Ralph Blane, blends a message of hope with a twinge of sadness. The original version of the song was decidedly less optimistic and included lines like, “Have yourself a merry little Christmas, it may be your last,” until director Vincente Minnelli and stars Judy Garland and Tom Drake complained that the song was far too depressing for the scene. While the song still remains immensely popular over 70 years later, the lyrics were particularly poignant for World War II-era audiences who had been separated from their loved ones.

Unlike “White Christmas” and “Have Yourself a Merry Little Christmas,” “I’ll Be Seeing You” isn’t a song specifically about Christmas, nor was it specifically written for a movie. “I’ll Be Seeing You” was originally written by Irving Kahal and Sammy Fain for the play Right This Way, which closed after just fifteen performances in 1938. The play may not have been notable, but “I’ll Be Seeing You” most decidedly was. The song’s melancholy, sentimental tone helped give it a whole new life a few years later after the United States entered World War II. As the war wore on, renditions recorded by Bing Crosby, Billie Holiday, Jo Stafford, and Frank Sinatra with Tommy Dorsey turned the song into an anthem for those who were missing their loved ones during the war.

Although “I’ll Be Seeing You” makes no mention of Christmas, it serves as a very fitting theme song for the 1944 movie by the same name, which does revolve around Christmas. In I’ll Be Seeing You, Ginger Rogers plays Mary Marshall, a prisoner who has been given leave to spend the holidays with her family. On the train, she meets Sergeant Zachary Morgan, played by Joseph Cotten, who is on leave while he tries to cope with PTSD. During the holiday, the two develop a romance as they try to keep their respective secrets hidden from each other. Unlike Meet Me in St. Louis and Holiday Inn, I’ll Be Seeing You directly involves life during World War II so using a popular song of the era as the main theme not only feels natural, it perfectly captures the bittersweet, wistful tone of the movie.