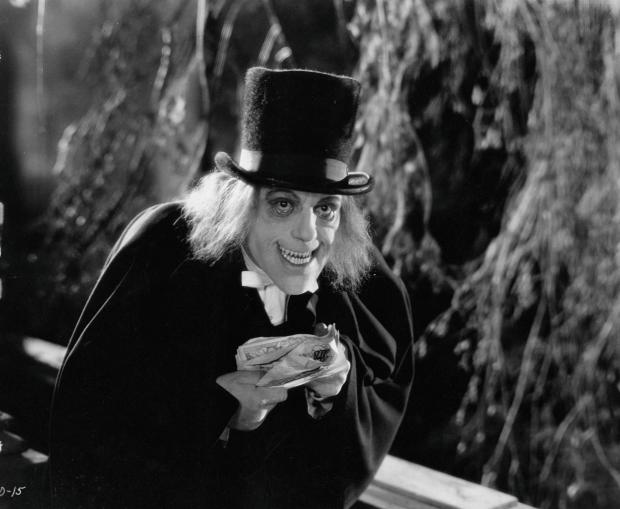 In 1927, Lon Chaney was one of Hollywood’s biggest stars, having made several on-screen triumphs in movies like The Hunchback of Notre Dame, Oliver Twist, and The Phantom of the Opera, which remain some of the most celebrated performances and films of the silent era. After having starred alongside Norma Shearer and John Gilbert in 1924’s He Who Gets Slapped, the first film ever fully produced by the then newly-formed Metro-Goldwyn-Mayer, Chaney began working under contract to MGM the following year and would remain at the studio for the final five years of his career. During his time at MGM, he starred in several of the most memorable movies of his career, including two versions of The Unholy Three, Tell It to the Marines, The Unknown, and Laugh, Clown, Laugh. But while many of the movies he made at MGM are still available and are shown on Turner Classic Movies, perhaps the most notorious of them all is one we can’t see: London After Midnight.

No series about lost films would be complete without discussion of London After Midnight. 90 years after its release, it is now widely regarded as the holy grail of lost films. The last known print of the film was destroyed in an MGM vault fire during the 1960s. (There seems to be some debate over whether the fire happened in 1965 or 1967.) The vault when up in flames when an electrical fire broke out, destroying London After Midnight along with original prints of several other early MGM titles, including movies made prior to MGM’s 1924 formation, some Our Gang shorts, original versions of Tom and Jerry cartoons, the color sequence from The Broadway Melody, the uncut version of Laurel and Hardy’s Blotto, and The Divine Woman, the only lost Greta Garbo film. 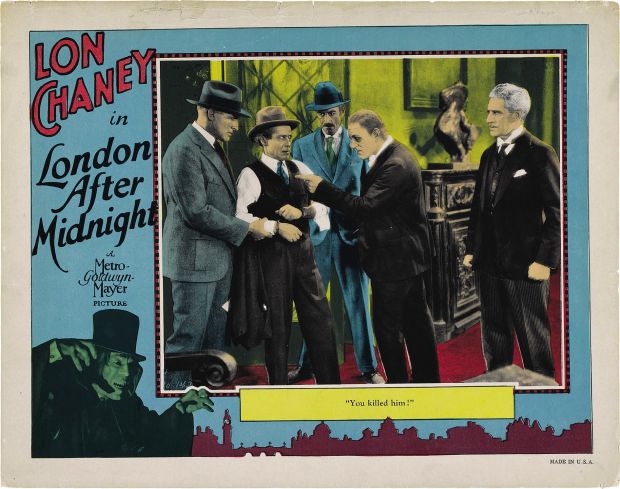 In London After Midnight, Lon Chaney plays Scotland Yard inspector Edward C. Burke, who is called to investigate the death of Roger Balfour. Balfour’s friend, James Hamlin (Henry B. Walthall), is convinced Balfour would never kill himself and Burke initially has his doubts about Hamlin’s nephew Arthur (Conrad Nagel), but since a suicide note is found, in which Balfour asks his daughter Lucille (Marceline Day) to forgive him, the case isn’t investigated any further.

Five years later, Balfour’s former home is being inhabited by a bizarre looking man with sharp teeth and a beaver hat (also played by Lon Chaney), along with two corpse-like female companions. When the new maid (Polly Moran) arrives, she’s convinced they’re vampires and directly responsible for the death of Balfour. Burke and Hamlin then realize the lease for the new, odd tenants is signed by none other than Balfour. After Lucille reports hearing the voice of her father calling to her, Burke and Hamlin discover that Balfour’s corpse is missing from its tomb and when they look inside the house, they see what appears to be Balfour having a conversation with the man in the beaver hat. At this point, Burke decides to use hypnosis to solve the case once and for all.

Upon its release in 1927, London After Midnight became one of the highest grossing films of the year. Out of all the films Chaney and Browning made together, London After Midnight was the most financially successful. Despite all of the hype that’s built around the movie over the years, it was hardly hailed as a masterpiece. Initial reviews were pretty mixed. Variety said of it:

“Will add nothing to Chaney’s prestige as a trouper, nor increase the star’s box office value. With Chaney’s name in lights, however, this picture, any picture with Chaney, means a strong box office draw. Young, Browning and Chaney have made a good combination in the past but the story on which this production is based is not of the quality that results in broken house records.”

The New York Times wasn’t terribly impressed with it, either:

“It is a somewhat incoherent narrative, which, however, gives Lon Chaney an opportunity to turn up in an uncanny disguise and also to manifest his powers as Scotland Yard’s expert hypnotist. You are therefore treated to close-ups of Mr. Chaney’s rolling orbs, which, fortunately, do not exert their influence on the audience.”

The New Yorker also had issues with the film’s plot:

“Mr. Browning can create pictorial terrors and Lon Chaney can get himself up in a completely repulsive manner, but both their efforts are wasted when the story makes no sense.”

In the 2000 documentary Lon Chaney: A Thousand Faces, interviewees who had seen London After Midnight also commented they felt it wasn’t that great of a movie. Historian H.A.V. Bulleid stated that he thought people would be very disappointed if they actually saw London After Midnight, while Mary Hunt, a moviegoer in the 1920s, said it was so fantastic and unreal it couldn’t be taken seriously, but the makeup was remarkable. Forest Ackerman seemed to be the most enthusiastic about it, saying that he believed Groucho Marx modeled his slouching walk after the walk of the man in the beaver hat. 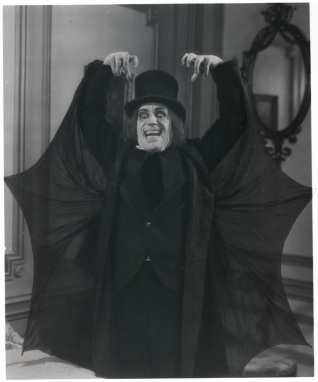 Had prints of London After Midnight remained in circulation over the years, is it possible that the film might have eventually undergone a critical re-evaluation at some point? Maybe, but at this point, it hardly seems relevant to even ponder it. The fact that it’s been missing for about 50 years now has helped cement its legacy as one of Hollywood’s most notorious movies in a way that no amount of praise from film critics ever could.

It’s not hard to understand why London After Midnight is such a sought-after movie. This is a movie that involved two of the biggest icons of the horror genre: Lon Chaney and Tod Browning. Don’t get me wrong — finding any lost Lon Chaney movie at all would be huge news in the film world. But a lost film that involves these two legends together makes it that much of a bigger deal. Even if it’s not such a great movie, it’s awfully hard not to at least be intrigued by the idea of getting to see Lon Chaney in a double role. And Chaney wasn’t the only one to have a double role, so to speak. Beyond his role as director, Tod Browning also wrote The Hypnotist, the short story the movie was based on.

Chaney and Browning are hardly the only noteworthy people to be involved with London After Midnight, either. It also starred some other actors whose names are likely to be familiar to fans of silent films and early talkies, like Marceline Day, Conrad Nagel, and Polly Moran. So whether you’re a fan of classic film in general or are just a big fan of horror movies in particular, London After Midnight truly occupies an important place in film history.

Another aspect of the London After Midnight mythology is the fact that the film became entangled in a murder case. In London’s Hyde Park on October 23, 1928, a man named Robert Williams was arrested for the murder of Julia Magnan. Upon his arrest, he told police that he’d done it because she was teasing him and that in an epileptic fit, he’d been taunted by a vision of Lon Chaney as he appeared in London After Midnight. Although Williams was initially sentenced to death, his sentence was later changed to allow him to serve his sentence at an asylum instead. So as if it weren’t enough that London After Midnight is famous for being lost, the fact that it was once blamed for driving a man to madness brings a whole different level of intrigue to the whole thing.

Although London After Midnight is not known to exist in its original form, it is still possible to get an idea of what it was like. In 2002, Turner Classic Movies produced a reconstructed version of the movie following the original script and using existing film stills. This version runs about 45 minutes and still occasionally airs on the channel. It was also included as a bonus feature in the Lon Chaney Collection released on the TCM Archive label in 2003, but that set now appears to be out of print. It was also remade in 1935 as The Mark of the Vampire, starring Lionel Barrymore and Bela Lugosi.

The important thing to remember is that although London After Midnight is now considered a lost film, there is still hope that a copy of it may be discovered someday. Over the years, there have been numerous rumors about prints of it being found, but unfortunately, those have turned out to be unsubstantiated. But there are several other cases of thought-to-be-lost films being found in archives and private collections. Even among the titles believed to be casualties of the 1965/1967 MGM vault fire alone, copies of some of those have turned up over the years. One of the most noteworthy examples would be 1922’s The Toll of the Sea, the second Technicolor feature to be made in Hollywood. Although it was thought to have been lost in the fire, the original camera negative was eventually found, minus the final two reels, and was restored by the UCLA Film & Television Archive in 1985, complete with newly-shot footage to replicate the missing footage. Perhaps, one day we will be able to tell a similar tale for London After Midnight.