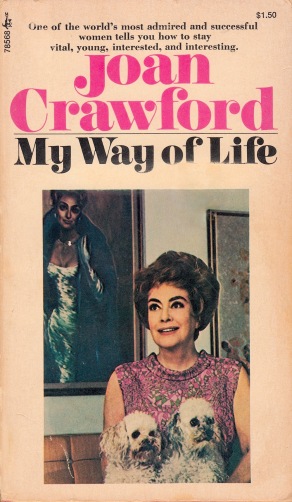 I’ve been a big Joan Crawford fan for many years and while I’ve managed to see many of her movies, until recently, I’d only heard about a book she published in 1971 titled My Way of Life. Every once in a while, I’d come across an article listing some of the more over the top quotes and lifestyle tips, which helped the book earn something of a cult following in the decades since its publication. Now, I love Joan Crawford and I love kooky lifestyle tips, so I was intrigued.

Recently, Jessica of Comet Over Hollywood did a review of the book and mentioned that an audiobook version recorded by Joan was posted on YouTube so of course, I had to check it out. I went in expecting major outrageousness, but you know what? I was actually kind of underwhelmed by it in that respect. In fact, I genuinely liked it.

That’s not to say it isn’t over the top in some respects. Of course its; it was written by a woman who lived most of her life in the public eye. Joan Crawford is very famously quoted as saying, “If you want to see the girl next door, go next door,” and she certainly never pretends to be the girl next door here. She lived her life on a bigger scale than most people ever will and the advice she gives reflects that, but that’s going to be the case with any given celebrity lifestyle book. Nobody expects readers of these types of books to take every bit of advice literally. But what you can do is find ways to make their advice work for your life and Joan actually had some legitimately good tips.

My favorite section of the book dealt with fashion and style. She was a big believer in the idea that everyone should develop their own personal style that makes them feel confident and suits their lifestyle. Not everyone is going to share Joan’s enthusiasm for hats, but you can’t really argue with those core fashion beliefs. It was also really interesting to hear her talk about how hard it was for her to buy off-the-rack clothing. One might think that designers would be lining up to get someone like Joan Crawford in their clothes, but she said she was never able to just walk into a designer’s shop and buy things off the rack because the available sizes were just too small for her. Now, I was expecting a lot of things from My Way of Life, but hearing that Joan struggled with stores not carrying clothes in her size was not one of them. In fact, that may have been the single most relatable thing Joan Crawford has ever said.

Compared to some of the things you hear about the lifestyles of today’s celebrities, a lot of Joan’s advice is actually sensible in comparison. When I got to the part about diet and exercise, I thought that’s where a lot of over the top stuff would come up, but that was not the case. While she was clearly disciplined about what she ate and how much she ate, she called out extreme dieting as being unhealthy. In the section about beauty, she doesn’t advocate going out and buying the most expensive products or go on about how she only uses the most exclusive products. Instead, she gives tips on making facial masks at home. Now that we have magazines full of stories about the drastic measures celebrities go to to lose weight and the outrageous amounts they pay for beauty products and treatments, it was interesting to hear a celebrity take a more practical approach to things.

Another reason I feel like it’s just too easy to make fun of My Way of Life is because a lot of it seems outdated by today’s standards. Again, of course it does — it was written nearly 50 years ago. In some ways, it’s very clear that this is from another era, but in other ways, it showed Joan to be rather progressive in her views on what women could be. It was published at a time when many women were stay-at-home mothers and housewives, but she certainly believed that women could succeed in the workforce and that women should have interests and lives outside of their husbands. And while she had strong opinions about pants and what body type you need to have to be able to wear them, she talks about some beauty trends that are hugely popular today, like contouring and microdermabrasion.

Even if you’re not into her lifestyle advice, if you’re a fan of Joan’s, you’re bound to love getting to hear stories about her life and career. My personal favorite was her story about the time she invited Greta Garbo to join her for tea in her dressing room at MGM and the first thing she did was try to impress Garbo with the fact that her dressing room had its own bathroom. Trust me, you’ll want to listen to the audiobook recording to hear Joan tell that story.

All in all, I was surprised to find myself honestly enjoying My Way of Life. So I guess that makes me part of its fan base, but I don’t seem to be in it for the same reasons other people are. While it has its moments of being over the top, it’s really silly to criticize it for that when it’s written by someone whose life was over the top. I wanted to hear about things like how she brought 37 pieces of luggage when she went to London to film Trog; I would’ve been let down if she said she just put a few things in a bag at the last minute. By far, the most shocking thing about it is a rape joke she makes. So aside from some of the more obviously dated bits, this really wasn’t the campy riot I’d been led to believe it was by some other articles I’d read about it. As Joan famously said, “If you want to see the girl next door, go next door.” And if you want campy Joan Crawford fun, watching Trog is a better bet. But it definitely is an interesting and entertaining book.