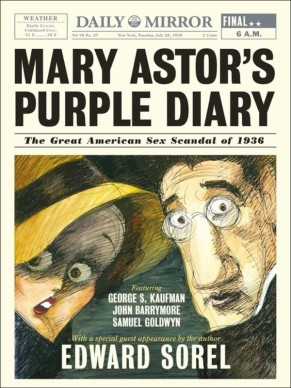 If you’re a classic film fan who has spent any significant amount of time watching Turner Classic Movies, surely you have seen at least one movie starring Mary Astor. With starring roles in some of the greatest films ever made, including The Maltese Falcon, Meet Me in St. Louis, Dodsworth, Midnight, and The Palm Beach Story, just to name a few, any classic film fan is bound to cross cinematic paths with Astor at some point.

While I’ve certainly seen plenty of her movies, I know little about Astor’s personal life or what she was like as a person. So when Edward Sorel recently published his book “Mary Astor’s Purple Diary” and I heard it was about a major scandal from the 1930s that involved her, a bitter husband, and a diary in which she documented her affairs in great detail, I was definitely intrigued. Hollywood has seen more than its fair share of scandals over the years, but this was one I hadn’t heard about before.

“Mary Astor’s Purple Diary” is one of the most unusual but delightful books about old Hollywood I’ve ever read. Rather than being a straightforward recounting of the scandal, it’s part showbiz book and part personal recounting of how Sorel became acquainted with Astor. While replacing the floors in his New York apartment back in the 1960s, Sorel removed the existing flooring and found old newspapers underneath dating back to when this scandal was in all the papers. He found himself fascinated by the story and felt compelled to learn more about Astor. Over 50 years later, Sorel clearly still feels a great deal of affection for her.

If you’re hoping for a detailed, in-depth book about the scandal or about Mary Astor in general, this is not the book for you. But if you’re in the mood for a quick, light, witty read with lots of great illustrations, “Mary Astor’s Purple Diary” is well worth your time. While it’s hardly an exhaustive biography, it had enough information about Astor’s personal life to make me want to learn more about her. Before reading it, I had known nothing about her awful father, her affair with John Barrymore, her ill-fated first marriage, and of course, the big scandal that occurred when her second husband tried to use her diary as a pawn to get custody of their daughter. It sounds like she led a very fascinating life. It was like this book did for me what removing that old flooring did for Sorel: drew my attention to an interesting woman by revealing a now somewhat forgotten scandal.