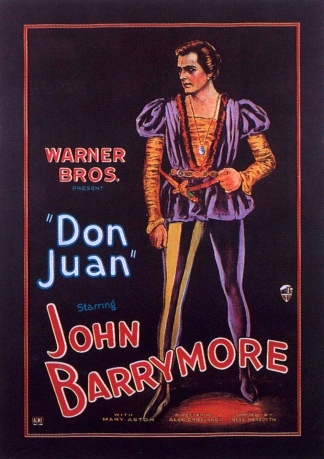 As a young child, Don Juan (John Barrymore) is warned of one thing by his father — take all the love he can get from women, but be careful to not give them your love in return. Don Juan’s father Don Jose (also John Barrymore) knows a thing or two about being spurned by women, first when he finds out his wife is cheating on him, then he’s killed by a woman who stabs him. Don Juan takes his father’s advice to heart and after graduating college, he lives in Italy and establishes quite the reputation with women. At the time, Italy was being ruled by the Borgia family and Lucrezia Borgia (Estelle Taylor) has heard all about him. She personally invites Don Juan to a party she’s throwing and he goes, knowing what happens to people who defy the Borgias.

At the party, Don Juan is quite unimpressed with Lucrezia, but is instantly enamored with Adriana della Varnese (Mary Astor). Adriana is the kind of woman who makes him forget about all those warnings his father had given him about women. Lucrezia becomes extremely jealous and tries to get her to marry Count Donati (Montagu Love) and plots to kill her father. But then Don Juan get in the way of her scheme and officially wins Adriana’s affections. But Lucrezia isn’t willing to give up so easily and continues to threaten Adriana into marrying Donati. Even knowing how dangerous it can be to cross the Borgia family, Don Juan still refuses to marry Lucrezia and stops Adriana’s wedding. Lucrezia tries to have Don Juan locked up and put to death, but he stops at nothing to marry the woman he loves.

Although it doesn’t feature any spoken dialogue, Don Juan is significant for being the first commercially released feature film with a synchronized soundtrack and sound effects on Vitaphone. Don Juan was definitely meant to be a big prestige picture for Warner Brothers. Not only did it utilize the new Vitaphone technology, it starred John Barrymore, one of the biggest stars in the world at the time, and featured a lot of lavish sets and costumes, plus some exciting action scenes. It even does a good job of using first-person camera perspective in some shots. Warner Brothers clearly pulled out all the stops and it definitely shows. Although the story drags a little bit, it’s generally a very entertaining movie and an excellent action role for the great John Barrymore. It’s not hard to see how this one was a huge hit when it was released and it remains very likable today. (Also, don’t forget to keep an eye out for Myrna Loy in a small role!)