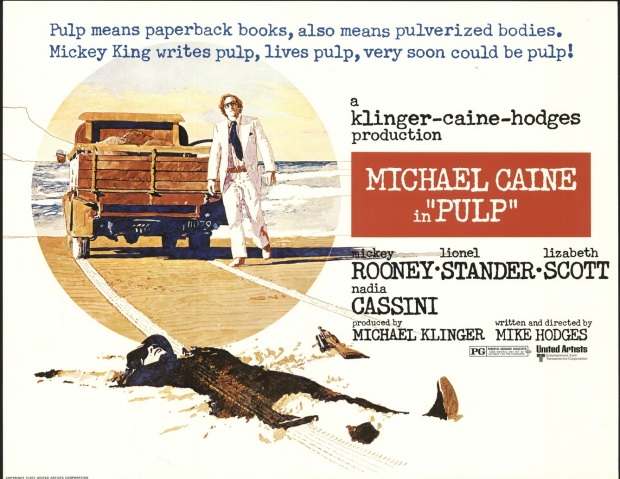 Mickey King (Michael Caine) is an author who specializes in writing sleazy pulp novels under dirty pseudonyms. When meeting with his publisher one day, Mickey is given the chance to ghostwrite the memoir of a legendary Hollywood actor. The book would be a guaranteed best seller and Mickey would be quite handsomely for the job, so he accepts, despite the fact that he has no idea who the mystery celebrity is.

Before finding out who his employer is, Mickey has to travel to Malta and wait to be met by a contact. Along the way, he meets a man who he thinks is his contact, but Mickey finds the man dead in a hotel room, it isn’t long before Mickey begins to suspect someone might have been trying to kill him instead. Eventually, Mickey meets his contact and finds out he’ll be working on the memoir of Preston Gilbert (Mickey Rooney), a retired actor famous for playing tough gangsters on film and hanging around with them in real life.

Preston has recently been diagnosed with cancer and wants to be sure his wild life story will be immortalized. Preston is also a notorious prankster so when a person appears to shoot Preston during a party, his guests think it’s just another one of his jokes. But Preston really is dead and Mickey has reason to think he also may have been a target. After all, Preston was friends with many criminals who may not want Mickey to make their stories known to the public. But it’s up to Mickey to find out who might be trying to kill him.

When I started watching Pulp, it seemed like the type of movie that would be right up my alley. I have a bit of a dark sense of humor and Pulp has dark, offbeat humor in spades and Michael Caine was perfect at delivering those dry lines. The story sounds like a murder mystery, but Pulp is really more of a dark satire of detective films. Although I really appreciated the movie’s style of comedy and liked seeing all the beautiful scenery (the movie was filmed on location in Malta), but the pacing was a little slow for my liking. It felt like it was a longer movie than it really was and the dark humor wasn’t enough to keep me interested in it. Perhaps I’m biased because I was tired when I watched it; I might be willing to give it another shot just because I really want to like this movie.