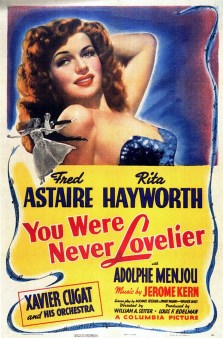 In desperate need of work after gambling away all his money, performer Robert Davis (Fred Astaire) goes to ask hotel owner Eduardo Acuna (Adolphe Menjou) for a job. Eduardo is too busy getting ready for his oldest daughter’s wedding, but Robert runs into his old friend Xavier Cugat (as himself), who works at the hotel. Xavier will be working at Eduardo’s wedding and suggests that Robert try to get the boss’s attention by performing with his band during the wedding.

The Acuna family has some odd traditions regarding marriage, the biggest one being that daughters are to be married off in order of their age. With the oldest sister of the family now being married, next in line is Maria (Rita Hayworth), who has no interest in getting married, much to the dismay of her two youngest sisters who are both eager to take a trip down the aisle. At the wedding reception, Robert is immediately smitten with Maria, but his attempt to get close to her doesn’t work out as planned.

Knowing how eager his youngest two daughters are to get married, Eduardo decides to try to change Maria’s ideas about romance by writing phony anonymous love letters and sending flowers to her everyday, in hopes that it will be enough to get her excited about a man. During one of his attempts to get a job working at Eduardo’s hotel, Fred is mistaken for a delivery boy and is sent to deliver a letter and flowers to Maria. But when Maria catches a glimpse of Robert delivering the message, she falls madly in love with him. When Eduardo finds out what’s happened, Eduardo does not approve and he tries to make it worth Robert’s while to end it by offering him a job if he drives Maria away. Despite some mishaps along the way, it turns out you just can’t break up true love.

What a charming movie! You Were Never Lovelier isn’t the best remembered movie of Fred Astaire’s career, nor is it one of Rita Hayworth’s best remembered movies, but it’s a really delightful and funny movie full of spectacular dance numbers. My goodness, did Astaire and Hayworth make amazing dance partners! It’s too bad they only made two movies together because I would have loved to see more musicals with the two of them. The story may be a bit convoluted, but overall, it’s just so darn much fun and entertaining to watch that I can’t help but love it. It’s everything I want when I watch a musical from this era.