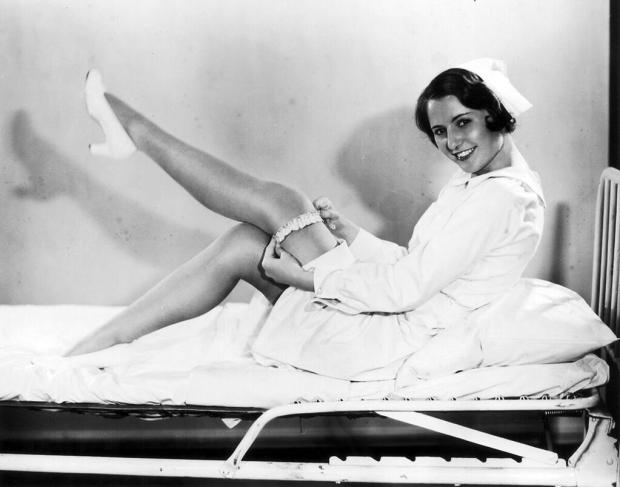 When Lora Hart (Barbara Stanwyck) lands a job as a probationary nurse at a hospital, she quickly learns the ropes with help from Maloney (Joan Blondell). One lesson she learns is that sometimes the patients she helps will be eager to show their gratitude. For Lora, that patient ends up being Mortie (Ben Lyon), a bootlegger she takes care of after he’s shot. She breaks from protocol by not reporting his gunshot wounds to the authorities, keeping Mortie out of hot water.

After becoming a full-fleged nurse, Lora becomes a night nurse for the two young children of socialite Mrs. Ritchey (Charlotte Merriam). One of her children has already died and Lora immediately recognizes that the two surviving children are starving to death, but Mrs. Ritchey can’t pull herself away from the booze to care. She’s deeply concerned about the treatment the children’s doctor is prescribing and about how much authority their chauffeur Nick (Clark Gable) has over the family. Lora does everything she can to get help, but has a hard time getting anybody to listen to her. When she finally gets help from a doctor she trusts, he advises her to stay and gather evidence.

As one of the Ritchey children is on the brink of death, a housekeeper tips Lora off about how she thinks Nick and the children’s doctor are plotting to murder the children as a way to get their trust fund. But the only person who can help Lora save the children is Mortie.

Whether you’re a big fan of Barbara Stanwyck or of pre-codes in general, you’ll love Night Nurse. This is one of Barbara Stanwyck’s best tough talking dame roles; she is an absolute boss in this movie. Watching her fight with people for the sake of protecting the children is truly a thing of beauty. I also loved seeing Stanwyck teamed with Joan Blondell. I really wish Blondell and Stanwyck had done more movies together. They are two of my favorite actresses from the pre-code era, so I wish I could see more movies where they play best friends who go around being sassy together.

The fact that a bootlegger ends up being one of the heroes.

Sure, Night Nurse has plentiful innuendo and gratuitous undressing scenes, but the ending is very distinctly pre-code. Not only does a criminal end up being one of the heroes, the movie ends with him casually alluding to the fact that he just had Nick bumped off, then happily driving off with Lora as Nick’s body is delivered to the morgue. Not that anybody is sorry to see Nick go, but it’s a much darker type of happy ending than a lot of people typically think of old movies as having.