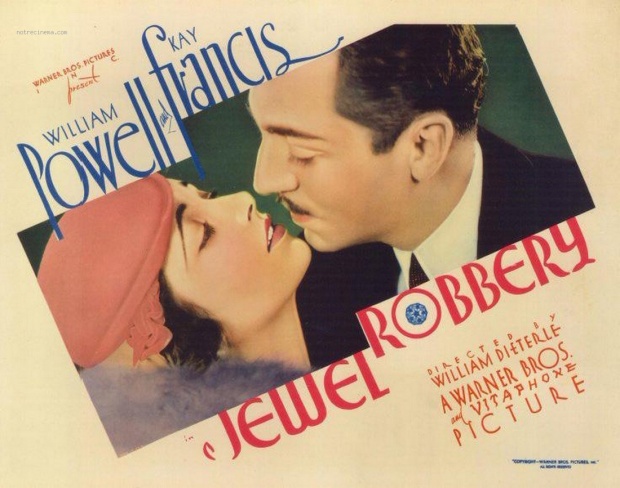 Baroness Teri von Horhenfels (Kay Francis) seems like the kind of woman that has it all. Or at least she would have it all if her husband weren’t so painfully dull. She tries to alleviate her boredom by having affairs and seeking excitement any way she can. But there is one thing she loves more than any man and that’s jewelry, which her husband gladly buys for her. While paying a visit to a very exclusive jewelry store to buy a new ring, they’re joined by a jewel robber (William Powell) and his gang. This thief has his own very unique style. He’s the wittiest, most charming robber in Vienna and has the distinct touch of offering marijuana to his witnesses so they won’t call the police.

Teri can’t help but be enchanted by the thief, even after he steals her new 28-carat ring. She isn’t offered the marijuana since she tells him that she has no interest in having him arrested. When she returns home, Teri and her friend are shocked to find her jewelry safe has been broken into, but are even more shocked to notice that nothing has been stolen. In fact, something has been left behind: her new ring. When the robber appears, she insists that he take the ring back since she could never be seen wearing it. He refuses and before long, a detective shows up to take both of them away. But it’s all part of a rouse to get her back to the robber’s apartment because he’s leaving for Nice soon and wants her to join him.

It’s awfully hard to resist a pairing of William Powell and Kay Francis. Francis and Powell were experts at working with this kind of suave, sophisticated, witty material and although Jewel Robbery isn’t the best movie they made together (I’d give One Way Passage that distinction), it’s still an extremely amusing movie.

The robber trying to steal the ring off of Teri’s hand.

When the police officer gets too high to be able to do his job, then gets his supervisor high and they make prank phone calls together.

A well-to-do woman who wants to leave her husband to be with a suave thief is pure pre-code material, but what makes this an essential pre-code in my book is the drug use. I can think of other pre-code movies that deal with drug use, Three on a Match is a big one, but I mostly think of it as being shown in a cautionary or unflattering way. Jewel Robbery not only actually shows people smoking marijuana, it shows people having a darn good time doing so. This was Cheech and Chong levels of weed enjoyment.