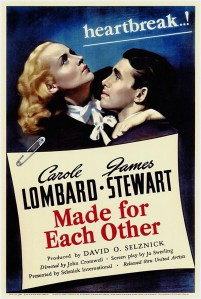 When up-and-coming attorney John Mason (James Stewart) impulsively marries Jane (Carole Lombard), most of his friends and co-workers are happy for him. However, two very important people in his life aren’t so happy — his boss Joseph Doolitle (Charles Coburn) and his mother Harriet (Lucile Watson). Joseph had been hoping John would marry his daughter Eunice and Harriet would have much rather had Eunice for a daughter-in-law. Joseph and Harriet make their displeasure known from day one and do everything in their power to make things difficult for the newlyweds. First Joseph and Jane have to cancel their honeymoon because of an important case John has to work on. Then Jane has to tolerate Harriet living with them in their very small apartment. But through it all, Jane and John do their best to keep their heads up.

One night, Jane hosts an important dinner for Joseph and some of the other lawyers at John’s firm. John is expecting to be made partner that night, so Jane wants everything to be perfect. But Harriet does everything she can to sabotage Jane’s efforts and to make things worse, Joseph brings Eunice along to the dinner. Everything that can go wrong does and worst of all, John doesn’t even make partner that night. John isn’t making much money at the law firm and times are tough for him and Jane. Things get even tougher when they have a baby. Just as John gets the courage to demand a promotion and raise, Joseph announces that everyone at the firm will have to take a pay cut. The bills keep piling up and Jane is forced to look for work.

Tensions continue to rise until they reach a breaking point on New Year’s Eve when John and Jane decide to separate while at a party. But before they even have a chance to leave the party, Jane finds out their baby is seriously ill. If the baby doesn’t get a special medicine, he will not survive, and the medicine would have to be flown in from Salt Lake City, which is snowed in. The only pilot willing to make the trip would need to be paid $5,000. With no one else to turn to, John turns to Joseph for the money

Made For Each Other starts out as a run-of-the-mill drama about a young couple trying their best, then it turns the melodrama up to 11 for the ending. The standard drama parts probably would have been pretty forgettable if it weren’t for the first-rate cast. As wonderful as Carole Lombard, Jimmy Stewart, and Charles Coburn are, Lucile Watson did a fantastic job of stealing her scenes. Watson did a phenomenal job of playing one of those completely insufferable bitter old hags you’d just love to give a good smack across the face. Made for Each Other also does a great job of creating a sense of tension and frustration. I liked the movie, but I found myself getting so frustrated for Jane and John that I don’t think I’ll be watching it again anytime soon just because it made me so tense. The movie just lost me when it it suddenly switched from being about fairly believable situations to being a total melodrama at the very end.