When a movie is described as being a product its time, it’s often meant in a sort of apologetic way.  It’s the sort of thing I say about creaky early talkies like The Broadway Melody or The Hollywood Revue of 1929.  It’s basically a nicer way of saying, “Look, I know this isn’t particularly good by today’s standards, but you’ve gotta remember…”

However, a movie being a product of its time isn’t necessarily a one-way ticket to being dubbed a cinematic fossil just a few years down the road.  Movies such as Saturday Night Fever and Since You Went Away completely embraced the eras they were made in but are still loved by audiences today.  Gold Diggers of 1933 is another product of its time that remains as entertaining as it was eighty-one years ago.

Trixie Lorraine: “Isn’t there going to be any comedy in the show?

Barney Hopkins: “Oh, plenty!  The gay side, the hard-boiled side, the cynical and funny side of the Depression!  I’ll make ’em laugh at you starving to death, honey!”

Gold Diggers of 1933 is a perfect reflection of so many things that were happening in the film industry at the time.  First and foremost, it dealt with the Great Depression during the Great Depression.  Even though times were tough, audiences were still flocking to movie theaters for a little bit of cheap escapism.  Gold Diggers of 1933 managed to directly address the Depression while still offering the fun and escapist qualities audiences craved.  When the character Barney Hopkins declares the show he’s producing is going to be a comedy about the Depression, it’s more like a mission statement for the movie because that’s exactly what it ends up being — funny but with a hard-boiled side. 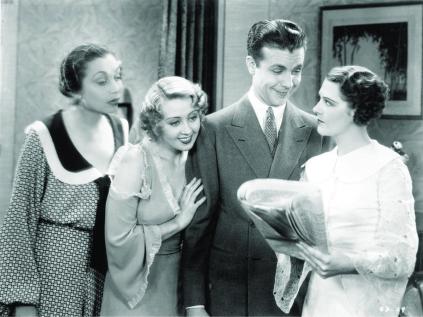 When we first meet the main characters, they’re all struggling just like everybody else was at the time.  They lose their jobs in the first scene; they have to steal milk and avoid the landlady because they can’t pay their rent.  When they find out a new show being produced, the ladies play a game to decide which one of them goes to find out about it because they don’t have enough nice clothes for everyone to go.  Even though the name of the movie has the phrase “gold diggers” in it, the main characters aren’t heartless mantraps; they’re very likable characters who are mistakenly stereotyped as gold diggers.  It’s not hard to want these characters to come out on top.

The film’s escapist elements come from the extravagant Busby Berkeley musical numbers.  The musical numbers have nothing to do with the overall story of the movie, but they’re the most memorable scenes of the movie.  These numbers could never be done on a real stage, but it sure is fun to suspend disbelief and just enjoy them for what they are.  The opening number, “We’re in the Money,” is fun to watch although it sets an ironic tone for the movie.  “The Shadow Waltz” is a moment of pure whimsy.

Because Gold Diggers of 1933 was made in the pre-code era, it gets away with being more risqué and political than many people think of older films as being. “Pettin’ in the Park” is risqué comedy for risqué comedy’s sake.  For a movie that offers so much escapism, it ends on a very political and haunting note with the “Remember My Forgotten Man” number.  “Remember My Forgotten Man” is a scathing indictment of the way World War I veterans were being treated at the time.  Both gritty and extravagant, it’s a stunning finale.