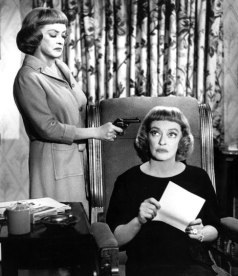 In their youth, twin sisters Edith and Margaret (Bette Davis in a dual role) were both in love with Frank DeLorca.  Even though Frank had been pursing Edith first, Edith’s relationship with Frank comes to an end when Margaret announces that she’s pregnant with Frank’s baby and they are to be married.  Edith doesn’t see Margaret again until eighteen years later when they are reunited at Frank’s funeral.

After the burial, Edith visits Margaret at her home and all of Edith’s past resentment comes rushing back to her.  Frank had come from a very wealthy family so while he and Margaret were living in the lap of luxury, Edith was struggling to make the cocktail lounge she owns financially solvent. To make things even worse, she finds out that Margaret was never really pregnant all those years before.  With so many financial problems hanging over her head, Edith plans to get Margaret to come over, kill her, and switch clothes with Margaret so it looks like Edith committed suicide and Edith can assume Margaret’s identity.

Even though Edith has no problem physically passing as Margaret, she struggles to cover up the differences in their behaviors.  But as Edith spends more and more time living Margaret’s life, she discovers that Margaret had a few skeletons in her closet — specifically one named Tony Collins (Peter Lawford).  And with police sergeant Jim Hobbson (Karl Malden), who had been dating Edith, getting involved, can Edith keep up the act?

I’ve always thought Dead Ringer was one of Bette Davis’ more under-appreciated movies.  What Ever Happened to Baby Jane? is generally thought to be Bette’s last significant movie, but she made a few gems after that and Dead Ringer is one of them.  It has its moments of pure camp; the scene where Margaret offers Edith money and Edith yells, “You haven’t got that much!” before knocking the checkbook out of her hands and shoving her into a chair is the stuff Bette Davis drag queen impersonator dreams are made of.  And you have to admit that the whole concept of getting to see Bette Davis duke it out with herself on screen is pretty campy in and of itself.

But on the whole, Dead Ringer is actually a very interesting thriller.  Bette has a field day in this movie; she’s great in both roles. The story has plenty of suspense and twists to keep you wanting more.  I love its supporting cast; Karl Malden is good and even though I don’t generally care much about Peter Lawford, I loved how wonderfully sleazy he was in this.  The musical score by André Previn serves as the icing on the cake.  Dead Ringer also features some fine direction from Bette’s Now, Voyager and Deception co-star Paul Henreid.

A word of warning: If you have never seen Dead Ringer, do yourself a favor and do NOT watch the trailer first! It’s one of those trailers that gives away absolutely everything. 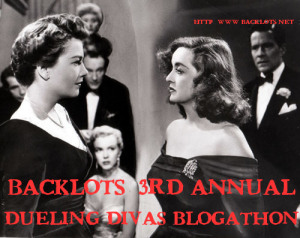 Thanks to Lara from Backlots for hosting the third annual Dueling Divas Blogathon! Head on over to Backlots to read more contributions.