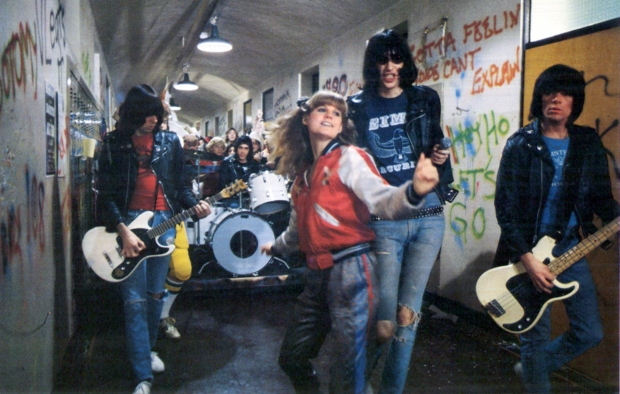 All the students at Vince Lombardi High love rock music, but none of them loves it more than Riff Randell (P.J. Soles) does.  Riff’s favorite band in the whole world is the Ramones.  She calls Joey Ramone the man of her dreams and her greatest ambition in life is to write songs for the Ramones.  With help from her bookish friend Kate Rambeau (Dey Young), Riff enjoys hijacking the school’s intercom system to play Ramones albums.  But when Miss Evelyn Togar (Mary Woronov) takes over as principal of Vince Lombardi High, the first thing she wants to do is rid the school of rock and roll.

Meanwhile, their classmate Tom Roberts (Vincent Van Patten) is looking to spice up his love life and sets his sights on Riff.  Tom asks Eaglebauer (Clint Howard) to set him up with Riff, but Eaglebauer thinks Tom would be a better match for Kate instead.  As luck would have it, Kate has a thing for Tom so when she asks Eaglebauer to set her up with Tom, he’s only too happy to help make it happen.

When the Ramones come to town for a show, Riff is determined to meet the band and give them some songs she’s written.  She skips school for three days so she can camp out for front row tickets, but when Miss Togar finds out, she confiscates Riff and Kate’s tickets.  That’s not about to stop Riff from seeing the Ramones, though.  She and Kate win tickets through a radio contest and sure enough, Riff makes it backstage and gives her songs to the Ramones.

Miss Togar uses Riff and Kate’s defiance to rally some parents for a record burning at school the next day.  As soon as Riff sees a flaming Ramones album, she leads the students in a revolt and they take over the school.  Just then, the Ramones drop by to tell Riff they love her songs and, naturally, they join the students in their mutiny.

As hokey as the jokes are, they always make me laugh.  P.J. Soles and Mary Woronov play their parts to deliberately campy perfection and they are endlessly entertaining to watch.  And when they’re delivering lines like, “Do your parents know that you’re Ramones?” and “I’m Riff Randell, rock and roller.” in such an awesomely over the top way, that right there is why I have an undying love for this movie.  In fact, the whole cast completely nails being intentionally campy, but Don Steele as radio DJ Screamin’ Steve and Herbie Braha as the Ramones’ manager in particular are some awesome scene stealers.

I also totally love this drawing of a mouse that has been allowed to listen to rock music.

And then there’s the amazing soundtrack.  I’m a big Ramones fan, so obviously I love their performance scenes.  The concert scene is great and the “I Want You Around” scene is actually a really good fantasy scene.  But the soundtrack isn’t all about the Ramones, it also features some good songs by Paul McCartney, Alice Cooper, Fleetwood Mac, Nick Lowe, and Chuck Berry.

I just can’t help but love this movie. I’ve never watched it and not been in a good mood afterward.

All weekend long, bloggers are owning up to some of their guilty pleasure movies. Be sure to head on over to the Kitty Packard Pictorial to find out which movies other bloggers have lurking in the back of their DVD collections.