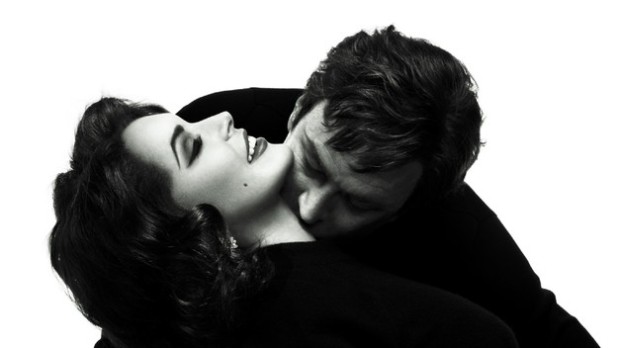 Liz & Dick opens with the title appearing over this picture, the movie’s one and only decent publicity photo. It’s all downhill from there.

If you’re pressed for time, I can sum up my thoughts on Liz & Dick in five seconds:

Now, on to my real review.

I don’t think anyone seriously expected a Lifetime movie about the romance of Elizabeth Taylor and Richard Burton to actually be good.  Everything about Taylor and Burton was larger than life and very expensive whereas Lifetime movies are notoriously low budget.  When Lindsay Lohan was officially announced to be playing Elizabeth Taylor, any lingering hopes for quality went right out the window and the best anyone was hoping for was an unintentionally hilarious cult classic along the lines of Showgirls or The Room.  Unfortunately, Liz & Dick didn’t even deliver that.

Don’t get me wrong, there is plenty of unintentional hilarity, but it doesn’t have the fun elements that make people want to watch a terrible movie like The Room. If a movie theater had a midnight screening of Liz & Dick, no one would be inspired to come dressed as Taylor or Burton and it’s not like you could bring liquor bottles to throw.  There aren’t even any ultra-quotable campy lines to yell at the screen like, “No more wire hangers!” or, “You’re tearing me apart, Lisa!”  In fact, I don’t think anyone would show up at all, because this isn’t so bad it’s good — it’s just bad.

Of course, the big question on everybody’s mind is how Lindsay Lohan’s performance was.  The answer is, not good.  She seemed totally disinterested in doing any actual acting. Not once did I look at her and see Elizabeth Taylor, I just saw Lindsay Lohan playing dress-up. On a scale of 1 to 10, the level of effort Lohan put into emulating Elizabeth Taylor’s voice is mostly a -5, but occasionally works up to  a 1.

I’ve always thought Lohan showed the most potential as a comedic actress and Liz & Dick did nothing to make me want to see her do any more dramatic roles.  She conveyed zero passion and the scenes of her trying to be angry are more akin to watching a toddler’s tantrum.  You see this best in a scene where, during some downtime, Elizabeth sits in her backyard yelling, “I’m bored! I’m so bored!”  (Skip to the 0:37 mark for that particular scene, although the whole video is amusing)

Although the delivery is hilarious, it’s not entertaining enough for audiences to quote it along with the movie.  Instead, they’re more likely to yell, “We all are!” Worst of all, she does this while Elizabeth is watching her children play, so it leads the audience to conclude that Elizabeth Taylor didn’t care about interacting with her children.

My favorite part of this GIF is the guy in the foreground who seems to be throwing his hands up in disbelief, just like the audience is doing.

Near the end of the movie, there’s a scene where Elizabeth flips a table over in a fit of anger, which is the most hilarious hissy fit I’ve seen since that episode of Mad Men where Pete Campbell threw a roasted chicken out the window.

As for Grant Bowler as Richard Burton, he put in a respectable effort.  He was the only person in the entire cast who was actually trying.

One scene I can’t neglect to mention is when Elizabeth and Richard are at a screening of Who’s Afraid of Virginia Woolf? and we’re treated to seeing Lohan and Bowler re-enact a scene from the movie.  Now, I was kind of hoping we’d get to see Lohan try to do the Martha voice, just because I knew it would be comedy gold and I was not disappointed.  Not only does she fail at the voice, I don’t think Lindsay has ever even seen Who’s Afraid of Virginia Woolf? because what she does in that scene in no way, shape, or form resembles what Elizabeth did in the real movie.

Liz & Dick‘s biggest failure, even more so than the casting of Lindsay Lohan, is the writing.  The dialogue is atrocious, the framing device of Taylor and Burton offering commentary in the form of some ethereal interview makes no sense, and worst of all, it’s boring.  I wasn’t shocked that Liz & Dick was a total disaster, I was shocked that it was so incredibly dull.  Liz & Dick desperately wants to be a roller coaster of a movie, but unfortunately, the roller coaster broke down and got stuck on the track just after leaving the platform.  Taylor and Burton had one of the most intriguing and fascinating romances of all time.  You really have try to make their romance this lifeless.  If you were unfamiliar with their relationship or their movies before watching Liz & Dick, you would be very confused as to why anyone would ever want to make a movie about these people and you’d certainly have no desire to seek out Cleopatra or Who’s Afraid of Virginia Woolf?

The movie trudges along at a glacial pace and I lost count of how many times I found myself looking at the clock, wishing it would just end already.  The final straw was when I realized there were twenty minutes left and it hadn’t even gotten to Taylor and Burton’s second marriage yet.  Their second wedding happened in the last five minutes and it barely even mentions that they also divorced for a second time.  That’s right, they essentially wrote out Taylor and Burton’s second marriage.

Since this was a Lifetime movie, nobody was expecting it to be a high budget affair.  But this was one low rent movie, even by Lifetime movie standards.  There’s one part where they’re filming a scene from The VIPs and the airport set they use looks like something you’d see in a high school play.  If you want to see some poorly chromakeyed scenery, look no further than the scenes of Elizabeth and Richard living on a yacht.  And I’m guessing there wasn’t much of a budget for make-up since there are repeated references to Elizabeth aging and gaining weight, yet no one gave Lindsay any padding or make-up to age her, even at the end when she’s playing Elizabeth at age 52.  So they have a 26-year-old playing a 52-year-old and they didn’t give her any kind of make-up to make it even slightly believable.

If you spent this past Sunday night watching anything other than Liz & Dick, congratulations.  You spent two hours of your life doing something more worthwhile.  Having Lindsay Lohan play Elizabeth Taylor was nothing but pure gimmick casting, and since everyone is now talking about this movie, Lifetime got exactly what they wanted.  Just watch this week’s episode of The Soup on E! instead.  I’m sure their writers will be having a field day with it.