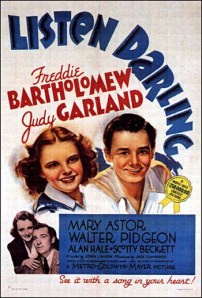 After the death of her husband, Dottie Wingate (Mary Astor) is unable to support her children, Pinkie (Judy Garland) and Billie (Scotty Beckett), and is on the verge of marrying banker Arthur Drubbs (Gene Lockhart).  She doesn’t love him and Pinkie and Billie don’t like him at all, but she needs the financial security.  Desperate to stop her mother from making such a big mistake, Pinkie and her boyfriend Buzz (Freddie Bartholomew) come up with a plan to “kidnap” Dottie and Billie in the family camper and take her for a little vacation, hoping the vacation will help her forget about Arthur.

Naturally, Dottie is surprised by this plan, but after a little while, she relaxes and begins to enjoy herself.  However, she still plans to marry Arthur when they get back home.  Buzz and Pinkie want to prove to Dottie that she can do better so they set out to find a more suitable match for her.  As luck would have it, they end up camping near Richard Thurlow (Walter Pidgeon), who just happens to have a lot in common with Dottie’s late husband.  Buzz thinks he’d be perfect for Dottie, and when Richard suddenly leaves the campground, he gets everyone together to follow him.

They manage to find Richard again, but Richard is very annoyed by the kids when Billie gets Richard’s camera (and himself) sprayed by a skunk.  Despite that incident, Richard and Dottie start to fall in love with each other.  The kids don’t know that, though, and think Richard hates them so they keep looking for another man.  They end up meeting J.J. Slattery (Alan Hale), who adores the kids and could very easily support them and Dottie.  But as much as Dottie likes Richard, she can’t share Richard’s love for living on the road because she needs to be settled in one place for the children.  Pinkie overhears her saying this and asks Slattery to adopt her and Billie so Dottie won’t be tied down and can be with Richard.  Of course, Slattery knows he can’t take Dottie’s children, but he sees to it that Dottie and Richard get back together.

Listen, Darling is a nice bit of fluffy entertainment, but nothing great.  By far, the most memorable thing about it is Judy Garland singing “Zing! Went the Strings of my Heart.”  Despite the first-rate cast, the movie is cute at best.  Judy Garland, Freddie Bartholomew, Mary Astor, and Walter Pidgeon have all starred in far more memorable movies.  But it is a pretty good example of the wholesome, family friendly movies that Louis B. Mayer was famous for making.