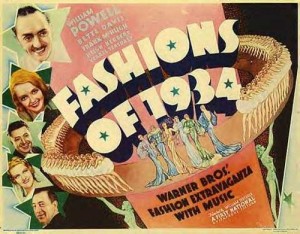 What do you do when the investment firm you own goes under?  Why, naturally you decide to get into the fashion game!  Well, at least that’s what Sherwood Nash (William Powell) does.  When he meets aspiring fashion designer Lynn Mason (Bette Davis), Sherwood, Lynn, and Sherwood’s partner Snap (Frank McHugh) decide to start making copies of designs by famous designers and selling them to discount shops for a fraction of the cost.  When the owners of shops that sell the real deals find out about this, they want to put a stop to it, but Nash smooth talks them into selling his knock-offs, too.  Not only that, he gets them to send them to Paris to better copy the designs.

To get in to see the designs, Lynn pretends to be interested in buying something while Snap stealthily takes pictures.  But when their film gets confiscated, they have to come up with another plan.  By pure chance, they find out that the famous designer Oscar Baroque (Reginald Owen) turns to old costume design books for inspiration.  So they get some costume design books and let Lynn design some pieces based on what she finds in the books, then forge famous designers’ signatures to them.  The stores back in New York buy the designs up like hotcakes, but Sherwood can’t resist an opportunity to make money.  When he meets a man with an abundance of ostrich feathers, he gets an idea.  He buys up the feathers and goes to see Baroque’s fiancée Grand Duchess Alix (Verree Teasdale).  He knows Alix is no Grand Duchess, she’s really just Mabel from Hoboken.

Since Alix doesn’t want Sherwood to tell Baroque who she really is, he blackmails her into convincing Baroque to design a musical show full of ostrich feathered clothes that Alix could star in.  He agrees and the show is a big success, so then he decides to open his own boutique.  But Lynn is getting fed up with Sherwood’s schemes.  Also, she’s fallen in love with him and is jealous of all the attention he’s giving Alix.  Even though her designs are once again hugely popular at the boutique, the idea of running off with Jimmy the piano player sounds pretty appealing to Lynn.  But by now, Baroque has found out about the forged designs and calls the police on Sherwood.  Sherwood gets arrested, but he has one more trick up his sleeve to get out of jail, get Baroque to buy the boutique from him, and get Lynn.

If I had a rating system, I’d give Fashions of 1934 2.5 out of 4 stars.  William Powell is pretty good in it, but poor Bette Davis is woefully out of place.  It’s pretty well-known that Warner Brothers really didn’t know what to do with Bette Davis when she first started working for them.  She wasn’t a glamour girl, but Warner’s insisted on trying to make her into one and this was their biggest attempt to shoehorn into that type.  She had blonde hair and was decked out in all sorts of fancy Orry-Kelly gowns, it was so not her style.  At least in movies like 20,000 Years in Sing Sing, even though they tried to make her somewhat glamorous, her part still had some grit to it.  There’s nothing gritty or raw about Fashions of 1934.  It’s a fun and entertaining little movie, but think of it as a William Powell movie more than anything else.  Bette isn’t outstanding here and although Busby Berkeley was involved, there’s only one musical number.  But at least he made the most of his one number, Spin a Little Web of Dreams is a really beautiful scene.  And if you’re interested in costume design, there’s a lot to appreciate here.