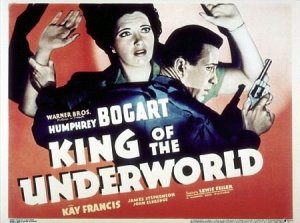 Dr. Carol Nelson (Kay Francis) and her husband Niles are both doctors with bright careers ahead of them.  However, Niles has a hobby of betting on horse races so he could use a little extra cash.  An opportunity for extra money comes his way when he treats a guy working for gangster Joe Gurney (Humphrey Bogart).  Joe liked Niles’ work so much that he decides that he’s going to send all of his guys to Niles when they need treatment.  Carol thinks Niles is getting all this extra money from betting on horses.  One night, he’s called to take care of someone at Joe’s hideout and has Carol wait in the car for him.  While Niles is inside, the police come and raid the joint and Niles is killed in the ensuing shootout.  Not only is Niles dead, but authorities assume Carol has also been working with Joe and her medical license is on the verge of being revoked.

Determined to prove her innocence, she moves to Wayne Center, where some of Joe’s men have just been put in jail, hoping that Joe will come to town and she’ll have a chance to infiltrate the gang.  She sets up shop and doesn’t get much business, but she’s willing to sit back and wait for Joe to show up.  Meanwhile, Joe has become quite the notorious criminal and he reckons himself to be the Napoleon of the underworld.  He is indeed on his way to Wayne Center and along the way, he meets writer Bill Stevens on the side of the road.  When Joe starts talking to Bill, he takes a shine to him when he realizes that Bill knows a lot about Napoleon.  Bill doesn’t realize who Joe is and accepts a ride from them.  When they get to town, Bill finally finds out who Joe is, but not before Joe starts trying to break his guys out of jail.  Bill tries to escape and is shot, but Joe also takes a bullet.

Bill is arrested because they think he’s part of the gang and Carol volunteers to give him medical attention.  After talking to him, she finds out that he’s really innocent and the two of them bond over being falsely accused of working with Joe.  Later that night, Joe drops by Carol’s place so she can stitch him up, too.  The next day, Bill is released from jail and is invited to stay at Carol’s place.  But then some of Joe’s guys capture him because Joe wants him to ghostwrite his autobiography.  When Joe’s gunshot wound starts giving him problems again, he has Carol brought over to his place to take care of it.  But when she returns home, she finds out the cops are after her because now they’ve been able to connect her to Joe.  In a last-ditch attempt to prove her innocence once and for all, she hurries back to Joe’s place and convinces him that he’s got a contagious infection that could cause him and the rest of the gang to go blind.  There isn’t really an infection, but she uses the story to give Joe and his gang some eye drops to temporarily blind them.  When the police arrive, most of the gang quickly surrenders, but Joe isn’t willing to give up so easily.  He tries to shoot it out with the cops, but he doesn’t make it out alive.  Carol is cleared of all charges and she and Bill are able to start a life together.

King of the Underworld is a Bogart movie that is very rarely discussed, which is why I was pleased to see it turn up in this year’s Summer Under the Stars line-up.  Not that it’s a particularly outstanding movie, it’s hardly one of the greatest movies that Bogart or Kay Francis ever made.  But it is a decent little movie (and I do mean little, it’s only just over an hour long) and I like seeing movies that are largely forgotten get some attention.  It’s sort of like Mary Stevens, M.D. meets a standard Warner Brothers gangster flick.  Bogart gets to show off his gangster persona but with a little humorous twist.  His character thinks he’s a very smart guy, but it’s pretty funny when he proves that he isn’t so smart after all.  And even though Kay Francis was only given this movie as a way to try to force her out of her contract, she kept her chin up and gave a nice performance anyway.  Like I said, it’s not a particularly outstanding movie, but it kept me entertained well enough.