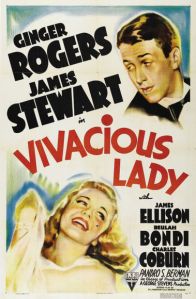 After his cousin Keith (James Ellison) runs off to Manhattan, Peter Morgan, Jr. (James Stewart) is sent after him to bring him home again.  Peter finds Keith, all right, but he also finds Francey (Ginger Rogers), a night club singer.  It’s love at first sight for Francey and Peter and after knowing each other for one whole day, they get married before getting on a train with Keith to Old Sharon, Peter’s hometown.  Peter’s parents, Peter Morgan, Sr. (Charles Coburn) and Martha (Beulah Bondi), have no idea about Francey and they’re pretty conservative, so they wouldn’t be too wild about Peter having eloped with a nightclub singer.

When Peter’s parents meet them at the train station, they assume that Francey came with Keith.  Peter really wants to tell his parents, but every time his father starts going on about Francey, his mother feels weak from a heart condition.  So then he decides to tell his parents during the prom held at the university where Peter teaches and Peter, Sr. is president.  There’s one other person Peter needs to break the news to: his first fiancée Helen (Frances Mercer).  Francey poses as a new student and Keith’s date to get into the prom.  She even meets Martha and hits it off with her.  But just as Peter is ready to tell everyone the news, Francey and Helen get into a fistfight that ends with Francey accidentally punching Peter, Sr.

Francey moves into an apartment and continues posing as a student so she can see Peter during his classes.  Peter does eventually manage to break the news to his father by blurting it out right before Peter, Sr. has to make a speech.  As expected, Peter, Sr. is not happy and Martha’s heart problems suddenly flare up again.  Except Martha missed the part where Peter said he was married to Francey and Peter, Sr. orders Peter to not tell Martha so she won’t get upset.  By now, Francey is getting frustrated with the situation and starts considering going back to Manhattan.  But when Helen catches Peter sneaking out of Francey’s apartment one night, she decides to tell Martha that Peter and Francey are together.  Martha goes to Francey’s apartment to investigate further and Francey accidentally admits to being married to Peter.  But rather than be upset, she’s happy.  She likes Francey and we quickly find out she’s not as uptight as Peter, Sr.  When Peter, Sr. insists that Francey and Peter divorce, Martha decides she’s fed up with his controlling behavior and leaves him.  Francey also reluctantly decides to leave Peter.  Martha and Francey unintentionally get on the same train together, but while they’re headed out of town, Peter and his father are trying to chase the train down and get their wives back.

I loved Vivacious Lady!  It instantly became one of my favorite Ginger Rogers movies, she was hilarious in it.  This was a perfect vehicle to show off Ginger’s comedic skills and she had wonderful chemistry with Jimmy Stewart.  Actually, this had a fantastic cast all around.  Jimmy was excellent, Beulah Bondi’s scenes with Ginger were so much fun, James Ellison made a great playboy type, and of course, if you want a stuffy, rich, older guy with good comedic timing, you can’t go wrong with Charles Coburn.  A wonderful bit of purely cheerful entertainment!