When you talk about film noir, people tend to primarily think of movies from the 1940s and 1950s.  Considering that those decades gave us movies like Double Indemnity, Kiss Me Deadly, and The Postman Always Rings Twice, it’s easy to see why that is.  But even though the style of film noir has roots in 1920s German Expressionism, you don’t usually hear anyone talk about silent film noirs.  But I can think of a silent that definitely embodies the film noir style: Asphalt.

Albert Holk (Gustav Frohlich) is a young police officer, dedicated to his job.  One night, while directing traffic, he finds himself entangled with Else Kramer (Betty Amann).  While he’s working, she’s in a jewelery store looking at diamonds, but she doesn’t have any intention of actually paying for one of them.  She uses her good looks to distract the store’s employee while she gets the diamond onto the floor and hides it in her umbrella.  As she walks out of the store, the staff realizes a diamond is missing and they start chasing her down and Albert catches her.  She doesn’t turn off the charm and the worker is willing to let her go, but Albert isn’t as easily swayed.  He wants to bring her to the station, but she convinces him to stop at her apartment so she can get her papers.  Of course, this is just another one of her ploys, and Albert sees right through them at first, but she eventually succeeds at seducing him.  He goes home, but they can’t get each other out of their heads.  Else seems to genuinely care for him, but Albert is conflicted between his feelings for Else and feeling guilty about not doing his job and letting her go.  The next night, Else sends him a gift and he goes to see her to confront her.  Although he’s angry at first, he succumbs to her charms once again.  But their encounter is interrupted by a surprise visitor: Else’s boyfriend.  Albert and Else’s boyfriend get into a violent altercation and Albert kills him in the fight.  Horrified by what he has done, he turns himself in for murder, but Else saves him by taking that first step toward redemption.

The term “film noir” wouldn’t even exist for another seventeen years after Asphalt was first released, but the movie is chock full of signature film noir elements.  It’s got Else Kramer, who starts out looking like the classic femme fatale: she’s beautiful, she steals, and she has no qualms about using her looks to get men to do what she wants.  We go on to see that she isn’t as ruthless as, say, Phyllis Dietrichson, but the femme fatale roots are still there.  Then there’s the plot, which would go on to become a pretty go-to plot during the golden age of film noir.  As you watch the movie, you’re bound to find plenty of shots that most definitely show the influence German film had on film noir: 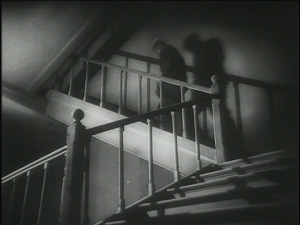 Asphalt really is a fantastic movie.  I loved Gustav Frohlich as the morally conflicted cop and he had real chemistry with Betty Amann, but Betty was the real scene stealer of the movie.  She was absolutely stunning and was a flawless choice for that role.  The cinematography is wonderful and it’s got some really great atmosphere.  If you’ve never seen Asphalt, it’s definitely worth seeking out.

I am glad to be part this year’s For the Love of Film (Noir) blogathon.  I wasn’t able to participate last year, but last year’s blogathon raised $30,000 to help save two short silent films.  This year is dedicated to helping preserve 1950’s The Sound of Fury.  Click here to learn more about the blogathon and if you are so inclined to donate money to this cause, please do so here.
If you’d like to see what other people are writing about, just head on over here! People are writing some great stuff for this blogathon, so if you like noir, you’ll find lots of quality reading material.