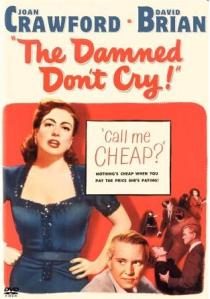 When the body of notorious gangster Nick Prenta turns up in the desert, it’s only natural that the police would start asking questions.  After they discover that Nick had been friendly with oil heiress Lorna Hansen Forbes (Joan Crawford), she’s the first one they try to talk to.  They go to her house, but find she’s hightailed it out-of-town, so they start looking into Lorna’s background.  It turns out there is no official record of who she is, where she’s from, or what makes her so wealthy.  Meanwhile, Lorna is in Texas, pulling up to her parents’ small home near an oil field.  When she gets inside, she starts telling them the whole sordid story that brought her there.

First she looks back to when she was known as Ethel Whitehead, married to Roy and mother of one son.  Roy doesn’t earn a whole lot of money, but Ethel desperately wants to be able to give her son a better life.  After she buys her son an expensive bicycle, she and Roy get into a bitter argument about it and their son is killed in a tragic accident.  With her son gone, Ethel sees no reason why she should stay married to Roy and leaves him.  She tries to find work, but that doesn’t prove to be easy since she has no skills or experience.  Eventually, she ends up getting a job selling cigars, which leads her to meet Wally, a dress salesman.  Wally is attracted to Ethel and gets her a job working as a dress model.  Ethel quickly learns that part of being a dress model is going out with buyers from out-of-town to Grady’s for a little gambling.

When Ethel meets Martin the accountant, she introduces him to the infamous Grady and manages to get him a job taking care of his books.  Grady really likes Martin and one night, Grady brings Martin to meet his friend George Castleman to get him another job.  Martin quickly finds out that Grady and Castleman are gangsters tied up in every vice imaginable and tells Ethel that he doesn’t want to take it.  Ethel, on the other hand, sees absolutely nothing wrong with taking the job if it would help him get ahead in the world and encourages him to take it.  After Castleman meets Ethel, he becomes quite taken by her and Ethel feels the same way.  Even though Castleman is married, he starts grooming Ethel to be his mistress by getting his socialite friend Patricia to help her create a more aristocratic background and give her a new name, Lorna Hansen Forbes.  As Lorna, she becomes the talk of the society columns.  But when Castleman starts to suspect that his cohort Nick Prenta may not be 100% loyal to him, he sends Lorna to California to get the dirt on him.  However, Lorna gets a little too close to Nick and the two of them fall in love.  Of course, jealousies start to flare and in the gang world, that usually means one (or more) of the people involved won’t be getting out of it alive.

The Damned Don’t Cry is one of my favorite post-MGM Joan Crawford movies.  When the movie starts, it looks like it’s going to be a total re-hash of Mildred Pierce.  A guy has been murdered and the woman police most want to talk to about it is Joan Crawford’s character.  Then Joan treats us to a flashback recalling her past as a working-class mother who longs to be able to provide a better life for her child.  Then when she leaves her husband, she has a hard time finding work because of her lack of experience, but manages to climb the ladder of success.  If you’ve seen Mildred Pierce, I’m sure this all sounds just a tad familiar.  But after that, it becomes a gangster movie aimed at female moviegoers .  If you’re a fan of Joan’s film noir dame roles, you’ll definitely want to see The Damned Don’t Cry.  She gets lots of awesomely tough lines like, “Don’t talk to me about self-respect! That’s something you tell yourself you’ve got when you’ve got nothing else!” delivered in that classic strong Joan Crawford style.  Overall, the movie may not be as strong as Mildred Pierce or Possessed (1947), but Joan makes it pretty darn entertaining. 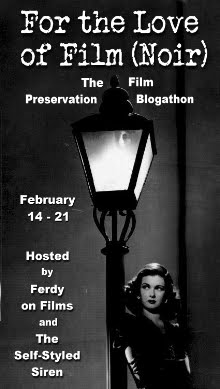 I am glad to be part this year’s For the Love of Film (Noir) blogathon.  I wasn’t able to participate last year, but last year’s blogathon raised $30,000 to help save two short silent films.  This year is dedicated to helping preserve 1950’s The Sound of Fury.  Click here to learn more about the blogathon and if you are so inclined to donate money to this cause, please do so here.