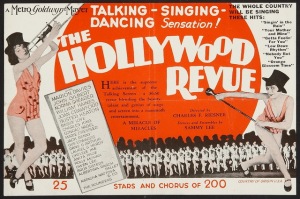 Before I saw The Hollywood Revue of 1929, I think the words I’d heard most often used to describe it were “historical curiosity.”  I’d also heard those words used to describe movies like The Broadway Melody, but they didn’t deter me from watching it and actually kind of liking it.  But after actually seeing The Hollywood Revue of 1929, I can safely say that it is, indeed, a historical curiosity.  All it is is a series of musical numbers and skits put on by MGM to show off their stable of stars and their shiny, new talkie technology.  For me, it was worth checking out just because I did have an interest in seeing things like Joan Crawford’s dance number and Norma Shearer and John Gilbert doing Romeo and Juliet.  There’s a certain charm to a lot of early talkies that’s kind of endearing to me and I got a kick out of some of the skits, but it’s really not anything spectacular.  It’s very dated, there’s no plot, and because it is a very early talkie, the sound quality is rather shaky.  Unless you’ve got a serious interest in film history or at least in one of the stars in this movie, I imagine it’d be pretty torturous to sit through.  But if you’d like to at least get a taste of it, there are plenty of clips on YouTube: