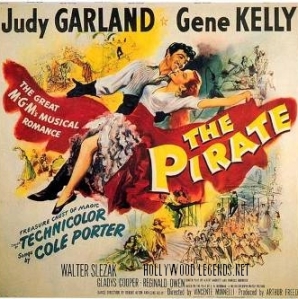 Manuela (Judy Garland) only has eyes for one man: Macoco, the infamous pirate.  She absolutely loves everything about the myth of Macoco, but the only problem is that she’s never met him.  People aren’t even sure if he’s even still alive!  Even when her aunt arranges for her to be married to Don Pedro, the town’s mayor, she can’t let go of the fantasy of being taken away by the great Macoco.  But just before she’s supposed to marry Don Pedro, Manuela convinces her aunt to travel with her to Port Sebastian.  They arrive in town along with a troupe of actors led by Serafin (Gene Kelly).  Serafin is a real womanizer, but that all changes the second he sees Manuela.  She turns him down, but later that night, she sneaks out to go see him perform.

When Serafin spots Manuela in the crowd, he hypnotizes her in front of the crowd hoping that she’ll declare her love for him.  Oh, he gets a declaration all right.  A declaration of love for Macoco the pirate.  But he also realizes that Manuela is a spectacular singer.  So Serafin and his troupe follow her back to her hometown and Serafin begs her to join the troupe.  She refuses, but when Don Pedro finds out about Serafin showing up in Manuela’s room, he’s ready to get rid of Serafin for once and for all.  But when Serafin gets a look at Don Pedro, he recognizes him as none other than the great pirate Macoco!  Serafin uses this bit of information to force Don Pedro into allowing his troupe to perform in town.  He also decides to pretend to be Macoco in a rouse to get Manuela to like him.

Sure enough, his plan works and Manuela starts to fall for Serafin.  But when she finds out what Serafin’s scheme is, she’s absolutely livid.  In a fit of rage, she trashes the room, but when she accidentally knocks Serafin unconscious, she realizes that she really does love him.  While this is going on, Don Pedro is hard at work trying to frame Serafin as being the real Macoco and has him arrested and is set to be hanged.  When Manuela looks at the evidence a little more closely, she figures out that Don Pedro is really Macoco.  Before he is to be executed, Serafin is offered a last request and he asks to put on a final show with his troupe.  Serafin and Manuela work together to use the performance as a way to get Don Pedro to confess his true identity to the entire town.  With Don Pedro safely out of the picture, Manuela is finally free to join Serafin and his troupe!

The Pirate can be summed up in the same way I can describe a lot of musicals: Is the story far-fetched and hokey?  Yes.  But is it great escapist fun?  Absolutely!  Judy Garland and Gene Kelly always made a great duo and The Pirate is really a great vehicle for each of them.  Judy got some memorable songs like “Mack the Black” to perform and Gene gets the chance to do some great dancing as well as plenty of opportunities to generally ham it up.  MGM had some pretty high hopes for this movie, but when it was first released, it really didn’t even come close to their expectations.  First of all, Judy missed 99 days of filming out of 135.  Then when it actually was released, critics weren’t very kind to it and it went on to become the only movie Judy Garland made for MGM that lost money.  But I’m glad that it seems more people have given it a chance over time because as far as I can tell, it does exactly what a classic MGM musical should do.