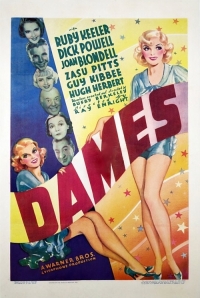 Busby Berkeley loved to taunt censors and uptight people, so I guess it’s no big surprised that he did a whole movie making fun of the morally self-righteous.  In Dames, Hugh Herbert plays Ezra Ounce, an eccentric millionaire with exceptionally high moral standards.  He’s looking for family members he can leave ten  million dollars to in his will and it looks like his cousin Matilda Hemingway (ZaSu Pitts) is one of his few options.  The catch is that he wants to leave his money only to the most upstanding family members, so nobody like his distant relative Jimmy Higgens (Dick Powell), who has his career in showbiz.  To make sure Matilda and her family meets his high standards, he goes to New York to live with them for a while and his stay is a disaster before he even arrives.  Matilda’s husband Horace (Guy Kibbee) accompanies him on the trip by train and returns to his cabin to find showgirl Mabel Anderson (Joan Blondell) sleeping in his bed.  She needed a way to get out-of-town after her show closed so she snuck into his cabin.  Trying to avoid a scandal, Horace gives her $200 and tells her not to mention it to anybody.

Meanwhile, Horace’s daughter Barbara (Ruby Keeler) has been having an affair with Jimmy (they’re 13th cousins) and wants to star in one of his shows someday.  With Uncle Ezra in town, it’s a challenge to keep all these juicy details from costing them their inheritance.  Especially when Mabel comes back and blackmails Horace into giving her the money Jimmy needs to put on his new show so that she can star in it.  When the press writes about the new show, they say it’s positively scandalous and that it’s being backed by a mysterious millionaire.  On opening night, Horace, Ezra, and Matilda show up just to see how bad it is.  The first musical number doesn’t shock them too much, but then Barbara does her first number and they’re pleased with how harmless it was.  By the end of the show, they think it’s great!  But their change in mood also had something to do with the fact that they spent the entire show drinking a health tonic that happens to be 23% alcohol.  But at long last, Uncle Ezra realizes that being high and mighty is awfully overrated!

1933 was a truly spectacular year for Busby Berkeley.  He added his signature touch to three of the most iconic musicals of all time, 42nd Street, Gold Diggers of 1933, and Footlight Parade, all in the same year.  With a year like that, it should come as no surprise that by 1934, he’d be slowing down just a little bit.  Dames most definitely doesn’t live up to the standards of Footlight Parade, but in all fairness, it would have been extremely difficult for him to live up to anything he had done the previous year.  The story and the musical numbers simply aren’t as solid or memorable as some of his previous efforts.  I’ll walk around with The Shadow Waltz stuck in my head all day, but Girl at the Ironing Board doesn’t have the same effect on me.  Even though we get to see a lot of the classic stars of Busby Berkeley movies like Joan Blondell, Dick Powell, and Ruby Keeler, they just don’t shine as brightly as they had before.  But with all that being said, I did enjoy Dames.  I loved the Dames number and I Only Have Eyes For You.  It was also very funny.  Gold Diggers of 1933 and Footlight Parade definitely had comedy in them, but Dames was a lot sillier than either of those.  And just because the stars didn’t have quite the same spark as they had before, they certainly weren’t bad by any stretch of the imagination.  It’s a fun three-star follow-up to an unbeatable four-star streak of movies.