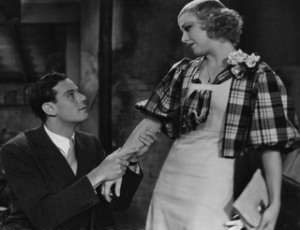 Mary Carroll (Ginger Rogers) and Jack Bacon (Norman  Foster) are two people with very different lives.  Mary has just moved to New York and it took her a while to find a job selling iceboxes by telephone.  Jack is an aspiring artist and a security guard by night.  What they do have in common is that both of them are having a hard time paying their rent.  So their landlord Max Eckbaum (George Sidney) comes up with an idea where both of them move into the attic and split the rent.  Since Mary works during the day, she’ll be gone while Jack needs to sleep and Jack will be working while Mary is sleeping; they would never actually be home together at the same time.  Neither of them is particularly happy about the arrangement, but they don’t really have much of a choice.  However, as their arrangement progresses, they each do stuff that annoys the other person even though they aren’t there at the same time and they grow to despise each other.

But what they don’t realize is that they have met before.  While waiting for her turn in the apartment one evening, Mary sits outside of a deli working on her sales pitch.  James walks out of the deli and starts flirting with her.  The two of them meet up again and James even promises to buy six iceboxes from her.  When they arrange to meet up again, they inadvertently end up sabotaging each other.  Mary stops at home for a quick shower, only to find her roommate has rigged the shower to fall and hit her on the head.  So Mary gets revenge by putting his good suit in the shower so it would get all wet.  Jack leaves Mary waiting for him in the rain while he tries to get his suit taken care of.  When he tries to call her the next day to explain, she won’t talk to him and accepts an invitation from her boss for a night out.

While she’s out with the boss, Elise, a wealthy older woman with designs on Jack visits Jack at the apartment and realizes he’s living with a woman.  They get into a fight that results in Elise refusing to leave and Jack having to leave his own apartment.  While he’s out, he runs into Mary and convinces her to have dinner with him and Jack agrees to be Mary’s date to the company picnic the next day.  They have a nice evening out, but what Mary doesn’t expect to find when she comes home is Elise asleep in her bed.  The next day, Jack and Mary have a lovely time at the company picnic, but as they are leaving the picnic, Jack sprains his ankle.  Mary takes him home and realizes that Jack is the roommate she despises so much.  The two of them fight, but everything works out for the best and the movie has a happy ending.

The story reminded me a lot of The Shop Around the Corner and Pillow Talk, but compared to those two movies, Rafter Romance is a downright obscure movie.  Rafter Romance was produced by Merian C. Cooper, and in the 1940s, Cooper sued RKO for money he wasn’t paid for movies he had produced in the 1930s.  As part of the settlement, he was given full ownership of six RKO titles, including Rafter Romance.  While he owned them, he only allowed Rafter Romance to be played on television in 1955.  It wouldn’t be seen again until 2007 when TCM acquired the rights to the movies owned by Cooper, restored them, and started airing them.  I thought Rafter Romance was a pretty cute movie.  It isn’t nearly as scandalous as a lot of other pre-codes and it’s not meant to offer any serious commentary on society, but it’s a fun little movie.