Part 3 of my Ziegfeld in Hollywood series. 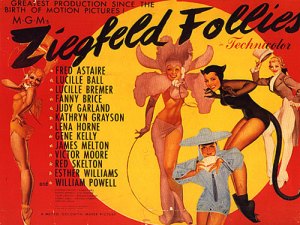 In a way, Ziegfeld Follies is kind of like Man With a Movie Camera: they’re both movies that are rather difficult to write about since neither one has a real plot.  They’re both concept movies.  In the case of Ziegfeld Follies, the concept is Florenz Ziegfeld (played once again by William Powell) in Heaven planning a show featuring some of the greatest film stars.  The movie is a true all-star extravaganza featuring the likes of Judy Garland, Esther Williams, Lena Horne, Fred Astaire, Gene Kelly, Fanny Brice, Kathryn Grayson, Red Skelton, and Lucille Ball in a series of musical numbers and comedy sketches like you might see in the Ziegfeld Follies.

Of all the Ziegfeld related movies, Ziegfeld Follies is probably my least favorite of the bunch just because I’d rather watch something with a real plot.  But with that being said, on the whole, I thought it was a fun movie and there were plenty of things that I did like in it.  Esther Williams’ water ballet was lovely to watch, even though there’s no possible way it could have ever been part of a stage show.  Judy Garland’s number, “A Great Lady Has an Interview”, was quite fun and entertaining.  Fred Astaire appears in four musical numbers, which was great for me since I love Fred Astaire.  Although his “Limehouse Blues” number was pretty ridiculous with the way they tried to make him look Asian.  One of those numbers, “The Babbit and the Bromide,” is a rare chance to see Fred dance alongside Gene Kelly.   The only other movie they ever danced together in was That’s Entertainment, Part 2 in 1976.  Fanny Brice’s skit, “A Sweepstakes Ticket”, was pretty funny.  And even though Lena Horne loathed the fact that her musical number was set in a ghetto, her performance was really top-notch.

Ziegfeld Follies runs just short of two hours, but when it was previewed, it ran nearly three hours.  Some of the numbers that wound up on the cutting room floor included: two more Fred Astaire numbers, two numbers with Jimmy Durante, and another sketch with Fanny Brice where she played her classic Baby Snooks character, and that’s just to name a few.  Many of the deleted songs are available on the soundtrack from Rhino Records or as bonus features on the DVD.  Even though the final version of Ziegfeld Follies is pretty star-studded, there were several skits and numbers that were originally planned but never actually filmed that would have added even more star power.  Some of the original skits would have added Mickey Rooney, Ann Sothern, Eddie ‘Rochester’ Anderson, Frank Morgan, June Allyson, Greer Garson, Margaret O’Brien, Walter Pidgeon, and Van Johnson to the cast.

I think Ziegfeld Follies has more touches of authenticity than any of the other Ziegfeld movies.  In the beginning of the movie, Florenz talks the audience through a brief history of the Follies, which interestingly enough, gets facts correct that The Great Ziegfeld got wrong in 1936.  Namely, that the first Follies opened in 1907 at The Jardin de Paris, not in The New Amsterdam Theater like it was shown in The Great Ziegfeld.  And then there’s Fanny Brice, who of course, really was a star in the Ziegfeld Follies.  Her sketch from the movie was originally performed in the Ziegfeld Follies of 1936.  Interestingly, the Ziegfeld Follies of 1936 was the last time Fanny Brice appeared on Broadway and Ziegfeld Follies was her last film appearance.  The opening number of the movie, “Bring on the Beautiful Girls,” features several older women as dancers.  The older women were all original Ziegfeld girls from the stage shows.

As I said, I prefer movies that have a real plot, but Ziegfeld Follies really is great fun.  If you need to watch something light and something you don’t have to think too much about, this is a great one to watch.  It’s just an escapism sort of movie and that’s all there really is to it.  Plus it’s fun to see so many stars together in the same movie.  Even the most classic all-star movies like Grand Hotel and Dinner at Eight don’t have this kind of star power!