You can say a lot of things about Detroit, but the Metro Detroit area is actually a pretty cool place to live for a classic movie fan.  There are two amazing places around here that routinely play classic films on the big screen: the Redford Theater and the Detroit Film Theater.  I’ll gladly take an excuse to visit either theater, but this weekend I was lucky enough to pay a visit both of them.  On Saturday, I saw Singin’ in the Rain at the Redford Theater and today I saw Mr. Hulot’s Holiday at the Detroit Film Theater. 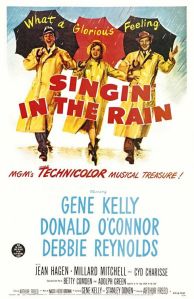 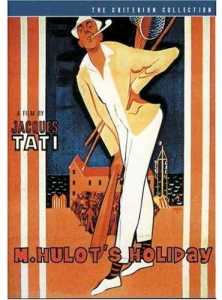 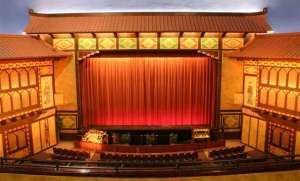 For me, going to the Redford Theater is a totally different experience than going to any other movie theater.  First of all, when you see something at the Redford Theater, you get so much more than just a movie.  The Redford Theater opened during the silent film era in 1928 and what makes the theater particularly unique is that it still has the original pipe organ that was installed when the theater was built.  The Redford Theater still plays silents from time to time, but no matter what movie you see there, someone will be playing that organ for half an hour before the movie starts and during intermission.  The music of choice is, of course, famous songs from movies.  Before the movie begins, they usually play a short cartoon or comedy bit by someone like Laurel and Hardy or The Three Stooges.  In this case, I got the Mr. Magoo cartoon “Magoo Beats the Heat.”  We also got an extra little treat during intermission.  Sometimes companies sponsor a movie screening and in the case of Singin’ in the Rain, it was sponsored by Argentine Tango Detroit so during intermission, some dancers gave a tango demonstration.  So for the price of admission, I got some live music, a cartoon, a movie, and dancing.  Considering the tickets are usually only $4, that’s one good deal.  Plus you get all that stuff while getting to spend some time in a gorgeous theater.  It has this fabulous Japanese decor that was covered up during World War II, but volunteers have put a whole lot of time and effort into restoring it and it looks amazing.

The Detroit Film Theater is also a remarkably beautiful theater.  It was built around the same time as the Redford Theater, in 1927, and is part of the Detroit Institute of Arts.   Every time I go there, it’s a wonderful experience, truly the premier place to see art house films in Detroit.  They primarily play more modern movies, but they often do play silents, classics, and classic foreign titles.  I’ve seen Nosferatu and The Phantom of the Opera there with the Alloy Orchestra, they usually come around once a year.  I’ve also seen City Lights and a double feature of Seven Chances and Sherlock, Jr. there, so Mr. Hulot’s Holiday was actually the first non-silent film I’ve seen at the DFT.

One of the things I’m always most interested in when I go to a classic film screening is what the crowd is like.  Sometimes I’m the youngest person there, other times it’s a bit more diverse.  For Singin’ in the Rain, there were young kids, there were some World War II veterans, and there was even one guy who looked like a biker.  Mr. Hulot’s Holiday seemed to draw more of an older crowd, but there were some younger people there, too.  Both shows had a pretty good turn-out.  Neither one was packed, but then again, I did go to afternoon shows and it’s been my experience that evening shows tend to have bigger crowds.  What I always love about the crowds at these screenings is that they’re always really enthusiastic about the movie.  At Singin’ in the Rain, there was one lady behind me who must have known every line in the movie by heart.  When every musical number was over, people clapped.  People were also clapping during Mr. Hulot’s Holiday whenever a joke went over particularly well.  I just don’t see that kind of enthusiasm when I go to see modern movies.  I sure don’t  remember the crowd bursting into applause at the end of each musical number when I went to see Chicago.  And because everyone there is there because they actually want to see the movie, I’ve never been to a classic movie screening where someone’s cell phone went off during the movie.  It’s just always such a pleasure to go to these screenings and I’m glad I live somewhere where I have access to places like these.